Is America's housing ready for an aging population? 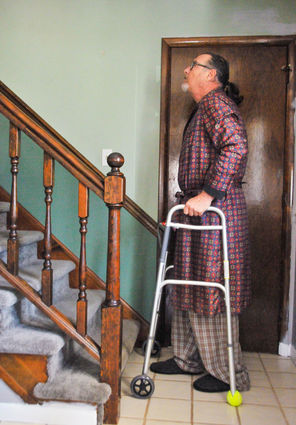 It should come as no surprise that older Americans overwhelmingly want to stay in their home as they age. But are their homes ready for them to stay?

For millions of older Americans, home is where they raised a family, hosted holidays and told bedtime stories to their children and grandchildren. It is often their nest egg as well as an anchor to their community.

But older homes don't always meet the needs of older Americans, according to a new report from the U.S. Census Bureau.

Only 10% of U.S. homes have key features to accommodate older residents, according to the report, "Old Housing, New Needs: Are U.S. Homes Ready for an Aging Population?"

The report looked at the number of homes in the United States that have accessible features, as well as households with older adults who have difficulty using some aspect of their home.

The need for accessible housing grows.

Over the next 10 years, the size of the population 65 and older is projected to grow by 17 million as baby boomers age. By 2030, an estimated one in five Americans will be 65 and older.

As the number of older Americans increase, so does the need for homes with the design, function and layout that allows older people to live safely.

Every year, about 30 million older people fall in the United States – one fall every second of every day.

According to the Centers for Disease Control and Prevention, around one in five of these falls results in serious harm. The direct medical costs of fall-related injuries total more than $50 billion annually.

Nearly 11 million older Americans have serious difficulty walking or climbing stairs; 7 million have trouble living on their own and almost 4 million have difficulty bathing or dressing themselves.

Yet most homes are not equipped to handle the needs of adults with these difficulties.

Only one in 10 U.S. homes are accessible for older adults.

Of the nation's 115 million housing units, only 10% are ready to accommodate older populations.

For example, only one in 10 homes have a step-free entryway, a bedroom and full bathroom on the first floor, so older adults do not need to use the stairs, and at least one-bathroom accessibility feature, such as handrails or a built-in shower seat.

More than a quarter of all households with an adult age 65 or older reported trouble using some feature of the home. Among households with adults 85 and over that figure rises to nearly half.

Steps and stairways are by far the most common problem areas in the home for older adults. A quarter of older households reported such difficulty.

Bathrooms pose considerable risks as well and are the second most common problem area of the home for older adults. More than half of bathroom injuries are directly related to using the shower and getting into or out of the bathtub, according to the CDC.

Installing handrails, grab bars and built-in shower seats in the bathroom could help reduce risk for older adults and improve the safety of their home.

Jonathan Vespa is a demographer in the U.S. Census Bureau's Social, Economic and Housing Statistics Division.