Kicking It at a dude ranch 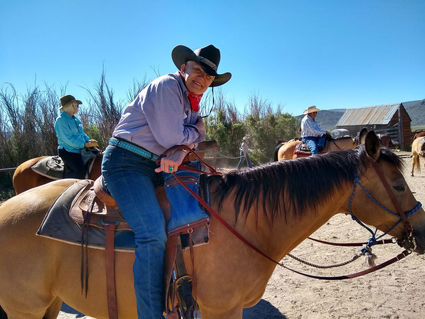 For some time now my husband and I have longed to drive historic Highway 395. Not realizing it went from Fallbrook all the way through California, Oregon and Washington up to the Canadian border until AAA mapped the trip for me, we decided to start small.

Although Lake Tahoe's south shore was magnificent, it does a body good to get out of this state to see how real people live. And so, we did.

We arrived at the B Street House Bed and Breakfast in Virginia City, Nevada, in time to celebrate the Fourth of July. When you go there, you will understand why I believe this town to be the most patriotic place in the country.

It was just a short walk from our B & B to the center of the activities on C Street. The sidewalks were crammed full of former Marines on Harleys which inspired every resident and day-tripper to cover their hearts and raise their voices to sing "The Star-Spangled Banner." Believe me, no one dared take a knee in that crowd.

Furthermore, each and every person in Virginia City carried a placard, bumper sticker, sign, and/or banner pledging support to President Donald Trump and his reelection.

Not only were the streets lined with Marines standing shoulder to shoulder, with them were dozens of cigar-smoking conservatives fitted out in authentic western garb all the way down to their loaded six guns as they guarded the entrance to the Bucket of Blood Saloon.

Over the weekend, these same Virginia City citizens stood proud and ready alongside the Storey County Sheriffs in preparation for threatened mischief. It wasn't St. Louis, thank you very much.

After a plate of the very best biscuits and gravy for breakfast, we drove over to the Hunewill Guest Ranch down Highway 395 South.

Hunkered in the wide Bridgeport Valley next to Yosemite National Park's northeastern ridge, which known as the Sawtooth Range, the 4,500-acre spread is home to the oldest family owned cattle ranch in the American West.

Founded 160 years ago by Napoleon Bonaparte Hunewill to provide lumber and beef to the nearby mining towns, the Hunewill Ranch boasts a history of eight generations on the same stretch of land. A true legacy to the American cowboy.

During my stay I rode Topaz, a buckskin mare about 15 hands high. Topaz and I rode out with the buckaroos twice, learning to get along as we crisscrossed meadows and practiced making turns, stops and giddy-ups.

The 50 riders were bunched into groups – advanced, intermediate, buckaroos and an adult-walking ride with Benny the resident storyteller.

Oddly enough, we all looked like bank-robbers with our kerchiefs as we stood in the chow line keeping social distance. There was always plenty to do at night even without TV, such as a cookout, colt gentling, a campfire sing along and a talent show. For talent night, Vincent played his ukulele, and I recited some Phyllis Diller quips.

Since we stayed only four nights, we missed Thursday's hayride. Although it adds to the adventure, horseback riding is not required at the all-inclusive, family-oriented Hunewill Guest Ranch in Bridgeport.

As we cruised south down Highway 395 toward home, it felt good to leave the higher (6,400') elevation behind. Just the same, we will recall this trip as a treasured memory long after the saddle sores have gone.