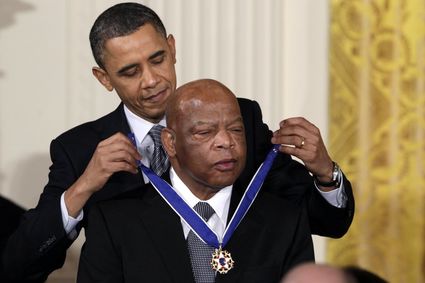 In this Feb. 15, 2011, file photo, President Barack Obama presents a 2010 Presidential Medal of Freedom to U.S. Rep. John Lewis, D-Ga., during a ceremony in the East Room of the White House in Washington. Lewis, who carried the struggle against racial discrimination from Southern battlegrounds of the 1960s to the halls of Congress, died Friday, July 17, 2020. (AP Photo/Carolyn Kaster, File)

ATLANTA (AP) - John Lewis will lie in repose at the Georgia capitol in his hometown of Atlanta in one of the last memorial services for the late Democratic congressman before he is buried.

Members of the public will be able to pay their respects to Lewis on Wednesday at the state capitol rotunda following a ceremony in his honor. A private burial service in Atlanta is scheduled for Thursday.

Wednesday's service is part of a series of public remembrances for Lewis that began over the weekend.

A memorial service at the U.S. Capitol in Washington on Monday drew Congressional leaders from both...