Scientists get closer to blood test for Alzheimer's disease 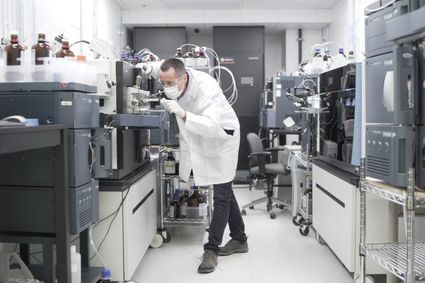 In this image from video provided by Washington University, researcher Nicolas Barthelemy works on a p-tau217 test for Alzheimer's disease at a laboratory in St. Louis, Mo., on Monday, July 27, 2020. Several companies and universities have developed versions of these tests, which look for a form of tau protein, one of the substances that can build up and damage the brains of people with Alzheimer's. (Huy Mach/University of Washington via AP)

An experimental blood test was highly accurate at distinguishing people with Alzheimer's disease from those without it in several studies, boosting hopes that there soon may be a simple way to help diagnose this most common form of dementia.

Developing such a test has been a long-sought goal, and scientists warn that the new approach still needs more validation and is not yet ready for wide use.

But Tuesday's results suggest they're on the right track. The testing identified people with Alzheimer's vs. no dementia or other types of it with accuracy...