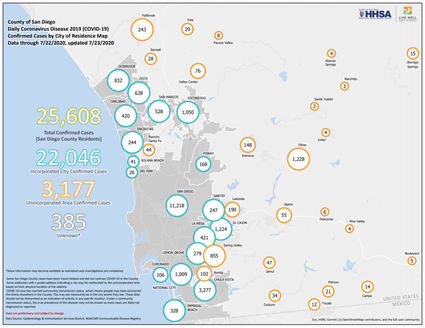 the region's totals to 25,608 cases and 512 deaths Four women and three men died between July 8 and July 21, and their ages ranged from 44 to 95. All had underlying medical conditions.

The county reported 8,304 tests Thursday, 6% of which returned positive. The 14-day rolling average of positive tests is 6%. The target set by

California is less than 8%.

After three days with a downward trend in cases, the 587 cases and 18 deaths reported Wednesday marked a swing in the other direction. Wednesday was the deadliest day due to COVID-19 yet reported in the pandemic.

Locally, Bonsall reported 28 cases, Pala has 29 and Fallbrook has 243 positive cases of COVID-19.

As a result of numbers that continue to rise, Supervisor Greg Cox announced Wednesday that San Diego County was starting a Safe Reopening

Compliance Team that will provide assistance to businesses and residents not in compliance with public health orders. The team's exact powers were not immediately clear.

``This is a carrot approach, not a stick,'' Cox said Wednesday. ``But we still have the stick and other tools to ensure compliance.''

Supervisor Nathan Fletcher said the team would enable the county to step up enforcement on ``egregious violations'' -- but the details on that enforcement were also unclear. Officials were reaching out to the various cities and communities in the county to collaborate on solutions.

as three or more COVID-19 cases in a setting and in people of different households -- remains higher than the state threshold of seven or more in seven days.

The new outbreak was reported in a restaurant/bar.

Wednesday, 485 people with COVID-19 were hospitalized, 166 of them in intensive care units.

From July 13 to July 19, the county also reported its most hospitalizations, 163, and the most deaths, 56, in any one-week span since COVID-19 began spreading in the United States in March.

``We implore you to not wait for someone you care about to lose the fight against COVID-19 before you take action,'' Dr. Wilma Wooten, the county's

According to Wooten, 95% of the county's COVID-19 deaths have had underlying medical conditions.

The percentage of San Diegans testing positive rose to 154.8 per 100,000 residents as of Wednesday's data, well above the state's criterion of

Wooten said that to fall below that metric, the county would have to record 234 positive COVID-19 cases or fewer for 14 consecutive days.

being reported. There are more than 500 investigators employed by the county, and although 98% of all cases had been investigated in that time frame as recently as June 25, that rate had dropped to 9% as of Wednesday.

Wooten said that in response, the county is attempting to hire more contact investigators, with 97 set to come on board Friday and another 212 are in the hiring process.