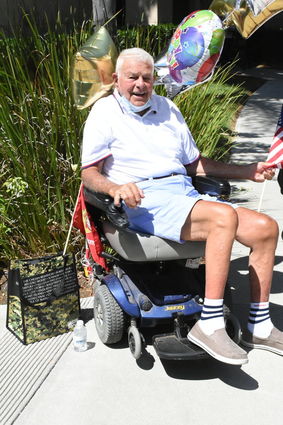 A Fallbrook resident since 1978, Carl Romano has many fond memories as a Marine and is surrounded by a lot of friends on his birthday, July 16.

Fallbrook honored one of its last remaining heroes from the Battle of Iwo Jima during World War II during a drive by birthday parade Thursday, July 16.

Retired U.S. Marine Corps Col. Carl Romano, who turned 95 years old July 16, sat out front of Silvergate Retirement Residence to watch as the North County Fire department led the parade, followed by members of the community and the local sheriff's substation to pay their respects.

Hank Donigan, a good friend of Romano and a retired marine as well, organized the parade.

"We have a church on Camp Pendleton that he attends every Sunday like we...