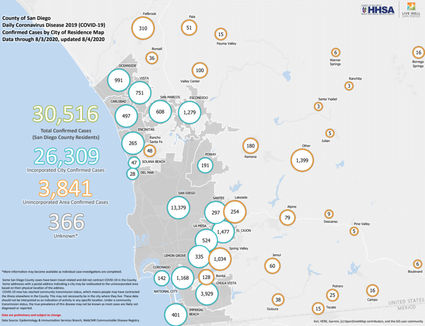 The county's total caseload stands at 30,516 and the number of fatalities at 568. Officials estimate that more than 23,900 people have recovered from the virus.

Locally, Bonsall has recorded 36 cases, one more than than the day before. Pala has recorded 51 cases, same as yesterday and Fallbrook has recorded 310 cases, six more since Monday.

One caveat to those relatively low numbers is the number of tests the county recorded Tuesday is the fewest in more than a month, with just 4,168 reported. Of those, 7% returned positive -- above the county's rolling 14-day average of 5.4%.

County Supervisor Nathan Fletcher on Monday described July as a ``roller coaster'' but said the end of the month showed promising trends, which he hopes will carry on into August and beyond.

Additionally, the number of people hospitalized due to COVID-19 continues to drop, with 381 in regional hospitals including 120 in intensive care units -- the fewest in more than a month.

The percentage of people testing positive for the illness who are contacted by a county contact tracer in the first 48 hours has increased from a dismal 9% in late July to more than 60% now. The county's target for this metric is more than 70%.

Of the 133 outbreaks reported since June 1, 48 have occurred in restaurant or bar settings, 27 in other businesses, nine in health care settings and eight in restaurants.

The county opened a new COVID-19 testing site in the Pacific Beach area Tuesday. The site will offer free testing on Tuesdays from 9 a.m. to 3 p.m. at the Pacific Beach/Taylor Branch Library, 4275 Cass St.

Appointments are required and can be made five days in advance by booking online at http://www.211sandiego.org or by calling 211.

According to county data, 57% of adult San Diego County residents have underlying medical conditions such as high blood pressure, heart and lung disease, cancer, diabetes and obesity. These conditions put such people at higher risk for serious illness should they contract COVID-19.

Of the total hospitalized during the pandemic due to the illness, 71% have been 50 or older. The highest age group testing positive for the illness

are those 20-29, and that group is also least likely to take precautionary measures to avoid spreading the illness, a county statement said.