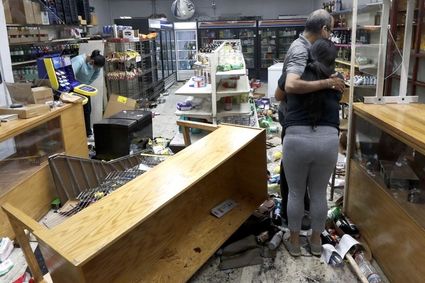 Yogi Dalal hugs his daughter Jigisha as his other daughter Kajal, left, bows her head at the family food and liquor store Monday, Aug. 10, 2020, after the family business was vandalized in Chicago. Chicago's police commissioner says more than 100 people were arrested following a night of looting and unrest that left several officers injured and caused damage in the city's upscale Magnificent Mile shopping district and other parts of the city. (AP Photo/Charles Rex Arbogast)

CHICAGO (AP) - Hundreds of looters descended on downtown Chicago early Monday following a police shooting on the city's South Side, with vandals smashing the windows of dozens of businesses and making off with merchandise, cash machines and anything else they could carry, police said.

Some 400 additional officers were...