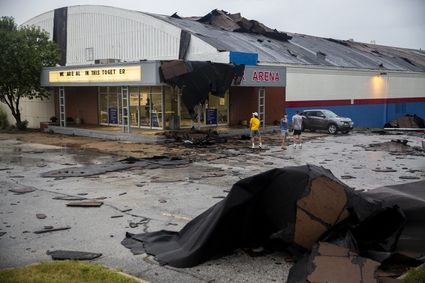 Pieces of the Buccaneer Arena roof litter the parking lot after a strong thunderstorm with high winds blew through the Des Moines metro on Monday, Aug. 10. 2020, in Urbandale, Iowa. (Kelsey Kremer/The Des Moines Register via AP)

IOWA CITY, Iowa (AP) - A rare storm packing 100 mph winds and with power similar to an inland hurricane swept across the Midwest on Monday, blowing over trees, flipping vehicles, causing widespread property damage and leaving hundreds of thousands without power as it turned toward Chicago.

The storm known as a derecho lasted several hours as it tore across eastern Nebraska, Iowa and parts of Wisconsin, had the wind speed of a major hurricane, and likely caused more widespread damage than a normal tornado, said Patrick Marsh, science support...