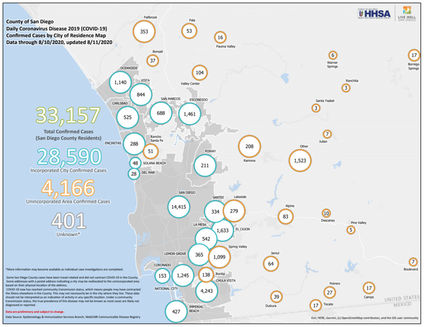 However, eight coronavirus fatalities were reported Tuesday, raising the death toll to 602. Of the deaths, 96% had some underlying medical condition. The total case count for COVID-19 climbed to 33,157 Tuesday.

A visit from county staff is the first action used, followed by a cease and desist order and then an order to close. If an entity refuses to close after that order it will be cited and fined $1,000 -- as University Heights gym Boulevard Fitness was Tuesday, Fletcher said.

County health officials also reported six community outbreaks, bringing the number of outbreaks in the past week to 29.

The latest outbreaks were reported in a restaurant/bar setting, a gym, two in government offices and two in businesses, according to the county Health and Human Services Agency.

The number of patients hospitalized for treatment for coronavirus totaled 333 as of Monday, with 112 of those patients in intensive care units. Sunday saw the fewest number of hospitalized COVID-19 patients since June.

public health officer, said this discrepancy might be related to the state using a different time frame than the county data or the fact that the state does not count inmates in correctional facilities in its countywide total.

The state's goal is fewer than 100 per 100,000. The case rate is a 14-day average and is based on the date of the actual onset of the illness in each patient, not the date the illness was first reported by the county. Lags in reporting often lead to delays in new confirmed cases being reported to and announced by health officials.

The county reported 5,669 tests Tuesday, 3% of which returned positive. The 14-day rolling average percentage of positive cases is 4.8%. The state's target is fewer than 8.0% testing positive. The seven-day daily average of tests is 8,362.

The next scheduled media briefing by county health officials will be Thursday. No briefing will be held Wednesday due to a county budget hearing. Fletcher said problems with the state's electronic reporting system -- which has led to a backlog in test results -- have mostly been resolved, but a few additional cases might be retroactively added to both local and statewide case totals in coming weeks.

The percentage of people testing positive for the illness who have been contacted by a county contact tracer in the first 48 hours increased from 7% on July 18 to 97% Tuesday. The county's target for this metric is more than 90%.

Of all the people hospitalized due to the illness, 71% have been 50 or older. But county residents ages 20-29 have accounted for 25.5% of COVID-19 cases, the highest of any age group, according to county data. That age group is also least likely to take precautionary measures to avoid spreading the illness, officials said.

``Some San Diegans think they're not going to get sick and therefore are not following the public health guidance,'' Wooten said last week. ``What

they don't realize is that they could get infected and pass the virus to others who are vulnerable.''

The age group with the second-highest number of infections -- residents ages 30-39 -- represents 18.9% of the county's COVID-19 cases.