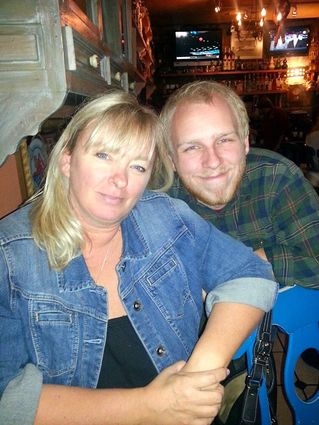 Heidi Blankenship-Turner poses for a photo with her son, Jeff, who died from epithelioid sarcoma in 2015. She recently began a fundraiser to help raise money for a foundation supporting research and a cure for the rare cancer.

It has been a little less than five years since the 2011 Fallbrook High School graduate Jeff Turner died with a rare disease at the age of 22. But his mother, Heidi Blankenship-Turner, is committed to the fight for a cure for epithelioid sarcoma, the cancer that took her son away from her in 2015.

Blankenship-Turner launched a GoFundMe page to raise funds in July, which was Sarcoma Awareness Month and also the birth month of her son.

"(In July) I finally felt strong enough emotionally to dedicate a daily posting on social media about sarcoma awareness and our Jeffrey," she said. "I have a friend that was diagnosed recently with a sarcoma, and she will be completing her final chemotherapy next week. I wanted to let more people be aware of this cancer and ask for donations so that more research and funding can be done."

On the GoFundMe page, Blankenship-Turner went into detail about the disease that changed her family's lives forever. She said she named the page "Our Jeffrey" because of the support system that formed around the young man while he was fighting the disease.

"When our son Jeffrey was diagnosed with epithelioid sarcoma in 2014 at the age of 20, we were lost," Blankenship-Turner said on the fundraising page. "We had never heard of this cancer and found that resources for information on it were few and far between, not to mention the lack of medical research for a cure for this disease."

As it turned out, that's because only one in 2.5 million people are diagnosed with epithelioid sarcoma each year. According to Blankenship-Turner, the cancer is one of about 70 sub-types of sarcomas.

In adults, sarcomas are estimated to be about 1% of all cancers, and occur in approximately 12,000 people a year in the U.S., according to a report by the Sarcoma Progress Review Group, and are "relatively more common among children."

And epithelioid sarcoma can only be cured with surgery.

According to Blankenship-Turner, her son was reporting sciatic pain and was misdiagnosed with plantar fasciitis because "he couldn't flex on the ball of his right foot."

A few months later, Jeff couldn't walk without crutches and he went in for an MRI where "the results showed a sheath tumor called a Schwannoma attached to his sciatic nerve below his right buttocks," Blankenship-Turner said. "These tumors are usually benign and surgery was scheduled to remove it. But once they reached the site, they found it to look suspicious, and instead of removing his tumor, they took a biopsy."

That's when Jeff was diagnosed with epithelioid sarcoma.

According to Blankenship-Turner, the radiation treatment worked and had shrunk the tumor significantly. She said surgery was scheduled to remove the tumor, though because of where the tumor was located, her son would be paralyzed from the knee down in his right leg.

"I joked that he wasn't going to be a professional skateboarder, so that was OK," she said.

The Turners were also told that because radiation had worked so well and the tumor removed, there was a minute chance of cancer metastasizing.

But, roughly six months later, Jeff was told that they found two spots on his right lung.

"Jeffrey and I were floored," Blankenship-Turner said. "We thought that we were going in for a regular follow-up appointment. I have never been hit by a truck, but when they delivered the results, that is how I felt. Jeffrey had always been so stoic throughout his life. Except this. Jeffrey only cried in front of me twice since this started. When he was diagnosed with cancer and when we found out it had spread to his lung. My baby was shattered, I was gutted ... the two of us absolutely did not see this coming."

Jeff was sent back to chemotherapy treatments, later finding Dr. Arun Singh at University of California Los Angeles with whom Jeff would begin extensive chemotherapy which hospitalized him for up to a week during each treatment.

"After a few of these chemo treatments, two painful draining of fluid from his lung, the new scan showed the initial two tumors in his lung had grown from the size of the tip of a crayon to a softball, with many additional ones now in his lung," Blankenship-Turner said. "It was as if the chemo was feeding them."

The cancer was spreading at an alarming rate, she said, and there was little doctors could do to stop it this time and Dr. Singh urged the family to take Jeff home.

"I was just told to bring my baby home for good," she said.

The family celebrated with Jeff, and just two weeks after returning home, he died Nov. 15, 2015.

"With his brother Max, grandparents, stepdad Marcus and I around him, Jeffrey passed away," Blankenship-Turner said. "We were blessed to have this time with him."

So far, a little more than $1,000 has been raised through the fundraiser at https://charity.gofundme.com/o/en/campaign/our-Jeffrey-sarcomaawareness/heiditurner5?utm_campaign=oc&utm_medium=email&utm_source=crowdrise

which will send 100% of the donations to The Sarcoma Foundation of America for research and a cure.

For more information on the organization, visit http://www.curesarcoma.org.