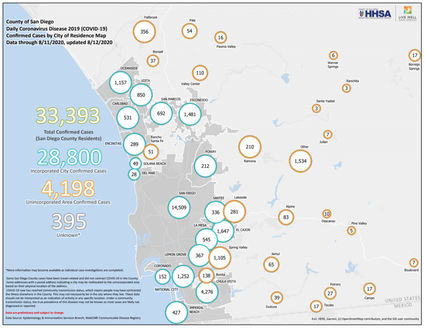 The free testing site will operate from 6:30 a.m. to 10:30 a.m. Monday through Friday and will focus on testing essential workers and American

citizens who live in Tijuana, according to San Diego County health officials.

No appointments are necessary at the walk-up site, which aims to offer about 200 tests daily. People getting tested will not be asked about their immigration status or who lives with them, health officials said.

``We know that communities in South Bay have been hit the hardest by COVID-19,'' said Dr. Wilma Wooten, the county's public health officer. ``The location was selected because of the increase in cases in the region and the number of people, especially essential workers who cross daily.''

The county's case rate per 100,000 residents as of Wednesday is 94.2. This is below the metric of 100 cases per 100,000 people set by the state. This is the first time the case rate has been below 100 since the county was placed on the state's County Monitoring List on July 3.

County health officials also reported two community outbreaks Wednesday, bringing the number of outbreaks in the past week to 26.

The latest outbreaks were reported in a grocery store and a manufacturing setting, according to the county Health and Human Services Agency.

Supervisor Nathan Fletcher said Tuesday that the county's partnerships with its 18 incorporated communities were allowing law enforcement to step up efforts to punish egregious violators of public health orders.

A visit from county staff is the first action used, followed by a cease-and-desist order and then an order to close. If an entity refuses to close after that order, it will be cited and fined $1,000 -- as University Heights gym Boulevard Fitness was on Tuesday, Fletcher said.

Fletcher said problems with the state's electronic reporting system -- which has led to a backlog in test results -- have mostly been resolved, but a few additional cases might be retroactively added to both local and statewide case totals in coming weeks.

Of all the people hospitalized due to the illness, 71% have been 50 or older. But county residents ages 20-29 have accounted for 25.5% of COVID-19 cases, the highest of any age group, according to county data. That age group is also least likely to take precautionary measures to avoid spreading the illness, officials said.

The age group with the second-highest number of infections -- residents ages 30-39 -- represents 19% of the county's COVID-19 cases.