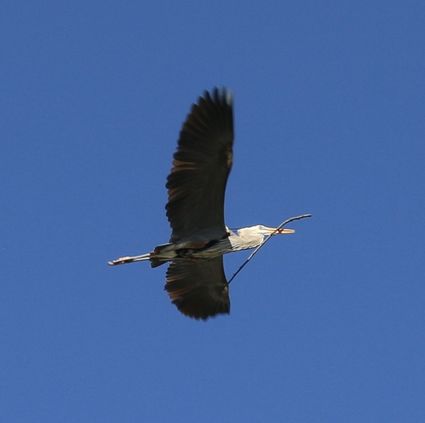 An adult male Great Blue Heron carries a stick to its mate for nest building.

In March, when people were told to hunker down at home to avoid the spread of COVID-19, traffic in Fallbrook sharply declined and bingeing on TV series became a familiar routine, some newcomers moved into a quiet part of northwest Fallbrook. Their identity was as surprising to their neighbors as the home they selected; three pairs of Great Blue Herons began building nests, a hundred feet up, in a star pine tree on Elder Street.

With average wingspans of 6 feet, the male herons spent several weeks soaring from the pine tree's crown and returning with sticks for the females to weave into nests. Every morning and well into the nights, they would call to each other and glide off to hunt for food.

The neighbors said they were intrigued and just a little annoyed.

While a heron's flight is a beautiful airborne ballet, their calls are more of a cacophony to the human ear.

He and his wife Judy have played host to the herons over the past months.

"They make quite a racket early morning and late at night. And I've found a fish head and a whole fish in the yard," Whisnand said.

Herons have a fondness for foraging in water habitats.

It was not long after the nests' completion, barely a month, that a new noise erupted from the tree: the loud squawking of hungry chicks, one or two in each nest.

Fallbrook residents came to watch the heron colony, taking photos and admiring the wonder of what the Cornell Lab of Ornithology declared the "largest of the North American herons."

Without a spit of water in sight, or so it seemed to some local land-dwellers, the nesting place seemd a odd choice; however, imagine a sky-high view though, and the herons' chosen home was not so surprising.

"(I) couldn't think why they would be in our neighborhood," Debbie Juiliano said, recalling her initial reaction to the birds, "(but) there is water along Pico Promenade."

Look a little farther and the heron meal plan made even more sense. Their tree was strategically located between the Los Jilgueros Preserve, Sandia Creek, Santa Margarita River, Ross Lake in De Luz and Lake O'Neill on Marine Corps Base Camp Pendleton. Their varied diet, though, meant not only fish and amphibians, but rodents, insects and even other birds have to beware.

Within a couple of months, the herons on Elder Street became a fixture, and people settled as best as they could into their pandemic routines. Regular dog walkers stopped to chat and enjoy the avian addition to the neighborhood, while honoring social distancing guidelines.

In the absence of traffic and other human made noises, the herons, along with the vast variety of birds in Fallbrook, were more noticeable. Bird songs, pretty and raucous, filled the unusual silences.

Juiliano said she found them entertaining.

"(It's) really fascinating to see them with the babies and hear the sounds they make," she said.

Although there has been no indication bird populations had increased during the nation's stay-at-home orders, birdwatching has surged as people look for ways to stay active during the coronavirus pandemic.

"They do poop all over our vehicles," Whisnand said, "But we've enjoyed watching them." 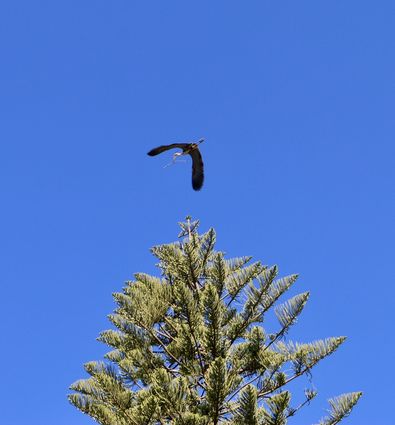 Come summer though, nature took its toll on the herons. One of the chicks fell from the tree in June. Still alive but unable to fly or feed, it was picked up by a bird rescue group. Then recently, a fledgling attempted its first flight but could not stay aloft. Whisnand found it in his yard, put out some water and waited for the parents to rescue it. They did not come, and by the next morning, the fledgling was dead.

But that is nature. And, as is their way, the remaining herons continue to roost in the star pine tree, some perched by empty nests, some still answering young ones' hungry chatter.

Fallbrook residents can still pause along Elder Street, look up, search for Great Blue Herons in graceful flight and listen for the sound of their calls, brek, brek, brekking.