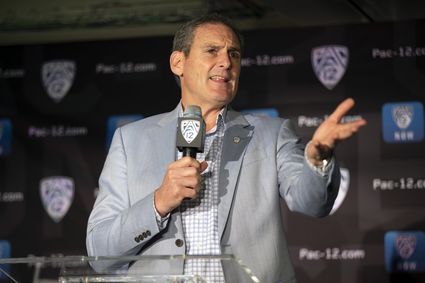 In this Oct. 8, 2019, file photo, Commissioner Larry Scott speaks during the Pac-12 NCAA college basketball media day in San Francisco. After the Power Five conference commissioners met Sunday, Aug. 9, 2020, to discuss mounting concern about whether a college football season can be played in a pandemic, players took to social media to urge leaders to let them play. (AP Photo/D. Ross Cameron, File)

The Big Ten and Pac-12 won't play football this fall because of concerns about COVID-19, taking two of college football's five power conferences out of a crumbling season amid the pandemic.

About an hour after the Big Ten's announcement, the Pac-12 called a news conference to say its season would be postponed until the spring.

The Big Ten's announcement comes six days after the conference that includes historic programs such as Ohio State, Michigan, Nebraska and Penn State had released a revised conference-only football schedule that it hoped would...