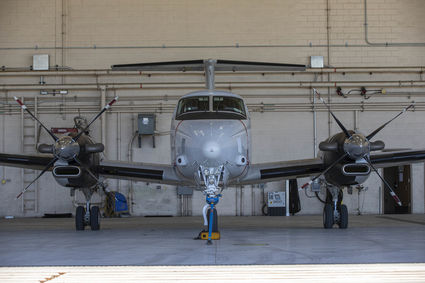 A U.S. Marine UC-12W sits in a hangar at MCAS Camp Pendleton, July 31, four days before taking its first flight.

Headquarters and Headquarters Squadron with Marine Corps Air Station Camp Pendleton made history by becoming a flying squadron for the first time in the unit's existence.

The Marines and sailors of H&HS took ownership of a UC-12W Huron aircraft July 31, and took the plane on its first flight with the squadron four days later.

"This is the first time in know...