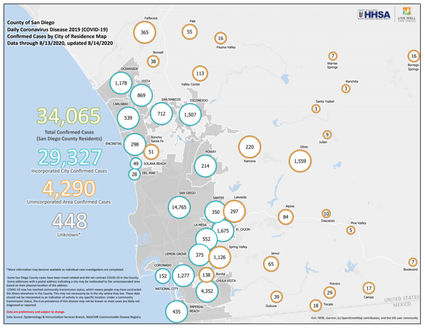 SAN DIEGO (CNS) - For the third day in a row, San Diego County public health officials reported a case rate of fewer than 100 positive COVID-19 tests per 100,000 people today, however, the state said it will have to review data before removing the county from its monitoring list.

Previously, county and state officials had said if the rate stays below 100 per 100,000 people -- it was 96.3 Friday -- for three consecutive days, the county would officially be removed from that list. After an additional 14 consecutive days below that number, K-12 schools could potentially reopen for in-person teaching, depending on individual school district metrics.

Additionally, 48 elementary schools have filed waivers with the county to return to school early.

That timeline is now uncertain, as is the timeline of reopening certain businesses for indoor operations.

Four women and three men died between Aug. 6 and Aug. 13, and their ages ranged from 49 to 94. All but one had underlying medical conditions.

Of the deaths reported thus far during the pandemic, 96% had some underlying medical condition. According to Dr. Wilma Wooten, the county's public health officer, the leading underlying causes which helped contribute to death were hypertension, diabetes, heart disease, dementia/Alzheimers and chronic kidney disease.

Of the 9,508 tests reported Friday, 4% returned positive, maintaining the 14-day positive testing rate at 4.6%, well below the state's target of 8% or fewer. The 7-day rolling average of tests is 7,688 daily and the county has reported 708,389 tests since the pandemic began.

admitted to an intensive care unit.

County health officials also reported four community outbreaks Friday, bringing the number of outbreaks in the past week to 24.

The latest outbreaks were reported in a business, a restaurant/bar setting and two in other places of business, according to the county Health and Human Services Agency.

Latinos are still disproportionately impacted by COVID-19, with that ethnic group representing 61.3% of all hospitalizations and 45.4% of all deaths due to the illness. Latinos make up about 35% of San Diego County's population.