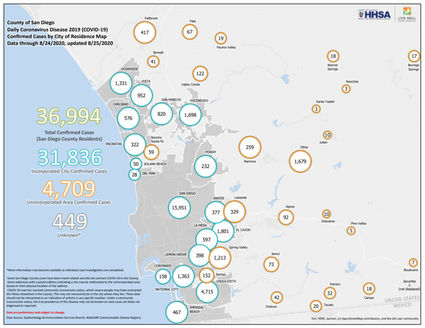 Of the 5,534 tests reported Tuesday, 5% returned positive, raising the 14-day rolling average of positive tests to 3.6%, well below the state's 8% guideline. The seven-day average number of tests performed in the county is 7,386.

County health officials reported one new community outbreak on Tuesday, bringing the number of outbreaks in the past week to 21. The outbreak

was reported in a health care setting.

The county will be placed back on the state's monitoring list should it be flagged for exceeding any one of six different metrics for three consecutive days. Those metrics are the case rate, the percentage of positive tests, the average number of tests a county is able to perform daily, changes in the number of hospitalized patients and the percentage of ventilators and intensive care beds available.

Even as the COVID-19 numbers continue to improve in San Diego County, local officials say the state has not yet provided guidance regarding reopening the county.

``We still have not yet received clarity,'' County Supervisor Greg Cox said. ``We do not yet know when we will get these guidelines.''

Supervisor Nathan Fletcher said the county was hoping to hear from the state this week.

On Monday, the county began releasing more in-depth COVID-19 data by race, ethnicity and ZIP Code, including the number of tests administered and

The case investigator and contact tracing data will show the degree to which the number of employees doing the work mirror the ethnic groups that make up the local population. Currently, the county has 435 case investigators contacting San Diegans who have tested positive for COVID-19, finding out what places they visited and who their close contacts are.

Additionally, 285 contact tracers were connecting with people who were close contacts with positive cases.

``It's important that we have the ability to connect with people,'' said Dr. Wilma Wooten, the county public health officer. ``We need to make sure they know what to do so that they can recover safely.''

The county was officially removed from the state's monitoring list last Tuesday, setting in motion a 14-day countdown that could see K-12 students back in the classroom as soon as Sept. 1, depending on the decisions of individual school districts.

Currently, 27 schools -- mostly private religious schools -- have been approved for in-person learning by the county.

The schools include Calvary Christian Academy, Francis Parker School, Chabad Hebrew Academy, San Diego French American School, La Jolla Country Day School and others. They were among nearly 50 schools that applied for a waiver to the county's public health guideline regarding in-person teaching.