By Martha Mendoza
The Associated Press 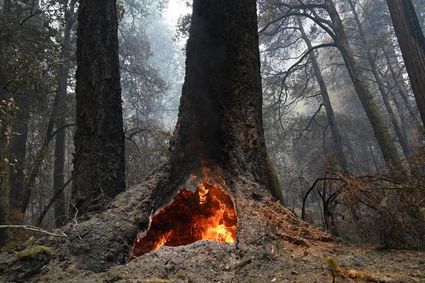 Fire burns in the hollow of an old-growth redwood tree in Big Basin Redwoods State Park, Monday, Aug. 24. The CZU Lightning Complex wildfire tore through the park but most of the redwoods, some as old as 2,000 years, were still standing.

When a massive wildfire swept through California's oldest state park recently, it was feared many trees in a grove of old-growth redwoods, some of them 2,000 years old and among the tallest living things on Earth, may finally have succumbed.

But a reporter and photographer with The Associated Press hiked the renowned Redwood Trail at Big Basin Redwoods State Park Monday, Aug. 24, and confirmed most of the ancient redwoods had withstood the blaze. Among the survivors is one dubbed Mother of the Forest.

"That is such good news, I can't tell you how much that gives me peace of mind," Laura Mc...