By CALEB JONES
The Associated Press 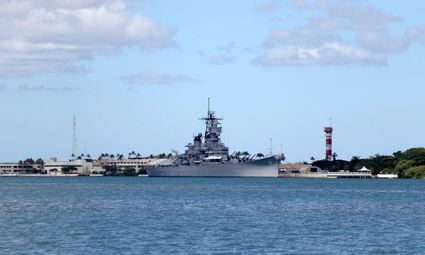 The USS Missouri Memorial is shown in Pearl Harbor, Hawaii, Aug. 11. A Pearl Harbor ceremony in Hawaii marking the 75th anniversary of World War II, scheduled for Sept. 2, will only feature veterans living in Hawaii after organizers limited those who can attend over coronavirus concerns.

A Pearl Harbor ceremony marking the 75th anniversary of the end of World War II – possibly the last opportunity for many aging U.S. veterans to commemorate the day – will be limited to survivors of the war living in Hawaii because of coronavirus concerns.

The plan had been to allow about 200 people, mostly World War II veterans, their families and government officials, to gather on the battleship USS Missouri, which hosted the Japanese surrender Sept. 2, 1945, in Tokyo Bay.

But an announcement made Friday, Aug. 21, said that those planning to fly into the state are no longer invited in...