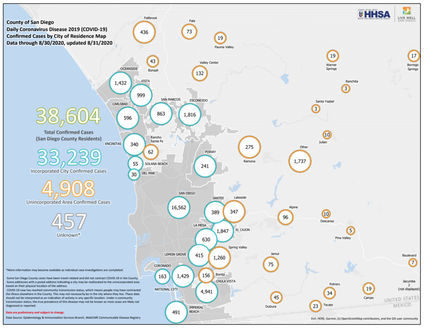 No new deaths were reported, keeping the county's deaths tied to the illness at 682. Of 5,731 tests reported Monday, 5% returned positive, raising the county's 14-day rolling positive testing rate to 3.7%, well below the state's 8% guideline. The seven-day average number of tests performed in the county is 6,543.

Businesses including movie theaters, gyms, museums and hair and nail salons resumed indoor operations Monday, with modifications, under newly issued state guidance. Restaurants, places of worship and movie theaters are only allowed up to 25% occupancy or 100 people -- whichever is less. Museums, zoos and aquariums are also required not to exceed 25% occupancy.

The county will put in place Monday night a new policy that restaurant patrons sitting indoors must wear masks at all times, except when actively eating or drinking. Outdoor patrons may still remove masks while not consuming food or beverages.

``This is not a green light, this is a yellow light,'' he said. ``We can't gun the engine of the economy full throttle yet.''

Dr. Wilma Wooten, the county's public health officer, said the county would follow state guidelines that retail businesses are to be restricted to 50% occupancy. Wooten said she was seeking clarification on grocery stores for the same restriction.

All indoor businesses must still abide by social distancing and face-covering mandates, as well as having a detailed safe reopening plan on file with the county.

Gov. Gavin Newsom released a new state system Friday that sorts counties into one of four tiers based on the extent of the area's COVID-19 outbreak.

Wooten said San Diego County had made it to the second tier, the only county in Southern California to earn that designation. The county still has a ``substantial'' COVID-19 presence, but unlike Orange, Riverside, Los Angeles and Imperial counties it is not considered ``widespread.''

There is a 21-day mandatory wait time before any county can move between tiers, and a county must meet the metrics for the next tier for two straight weeks. Also, a county may only move one tier at a time. The state will monitor the data weekly, with results announced Tuesdays.

On Monday, San Diego State University reported another 13 students, some of whom live in campus housing, have tested positive for COVID-19. They join seven other students who tested positive for the illness last week. None of the students have attended any in-person classes.

An SDSU statement said the university had taken direct action with the students who live in university-owned housing.

``Three of the cases live on-campus at Zapotec, Villa Alvarado Apartments and South Campus Plaza North,'' the statement said. ``Two on-campus students have been moved to a designated isolation room, per SDSU's Office of Housing Administration COVID-19 protocol. The other student was already isolating away from campus, prior to seeking testing this weekend. All are recovering well.''

A total of 31 SDSU students have contracted COVID-19 since March.

San Diego County schools will be allowed to reopen Tuesday, depending on individual school district policies.

County health officials reported two new community outbreaks Monday, bringing the number of outbreaks in the past week to 16.