From custom gloves to hats, jerseys and more, Fallbrook Sporting Goods has it all 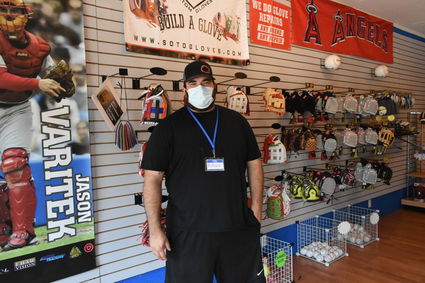 Richard Martinez and his wife spend two months planning before opening the store in Fallbrook and hope to bring the community their sporting needs.

Richard Martinez and his family decided to open up a sporting goods store in Fallbrook.

Fallbrook Sporting Goods came by its name after Martinez discovered how much the community loved their village's name.

"It's the friendliest town out here," Martinez said. "We could have named it tons of different things, but we went with the basic Fallbrook Sporting Goods – our biggest focus was to have the name in our business."

During their grand opening Saturday, Aug. 22, Fallbrook residents, friends and family stopped by to see the new shop and what it has to offer.

"It was about two months of planning everything," Martinez said. "I come from a sports background so I just went to her (his wife), my boss, and just asked her what she thought with our kids and sports, and thought let's do it."

The community has been really supportive, according to Martinez, and they've been posting to Facebook and other social media platforms.

"We're trying to build a store for the community,"

Martinez said. "If you want pickleball, we'll bring in pickleball. We had a gentleman talk to us about fishing today; we're trying to bring in fishing.

"It definitely seems like they want it, and hopefully we can bring them what they need," he said.

They also do custom and special orders.

"We do anything from custom gloves, all the way to custom hats, custom T-shirts; we can customize your whole team uniform, head to toe, between any style of jersey, any sport jersey," Martinez said. "It's a quick turn-around, all exclusive prices."

"Eventually we'll hold signups in here, and then custom fit everybody," he said.

People first thought Martinez was crazy when he decided to open up a shop during COVID-19, he said.

"I think we've got to that point where we're tired of being cooped up," Martinez said. "We wanted to open up now and take advantage of when we're allowed to return 100%; we want to be ready."

He said they wanted to hurry and open their doors so that they could get their name out there. Martinez hopes to network with the community.

"Meet with athletic directors, hopefully the community. We offer P.E. equipment; we offer anything for the uniforms, to booster gear to fan gear," he said. 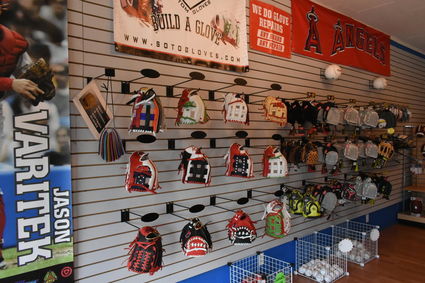 Martinez played sports as a child and spent 10 years coaching.

"My kids play different kinds of sports, between volleyball, basketball, softball," he said.

He and his wife have 10 children.

"We really want to try and get involved in every sport. We're sports nuts," Martinez said. "So we're trying to bring that love of sports into the community, and hopefully it works out."

The shop's current hours are 10 a.m. to 6 p.m. Monday through Saturday and noon to 4 p.m. Sundays, although they may adjust hours as need be, he said.