Laser light beam conversation? 20 years ago, they did it 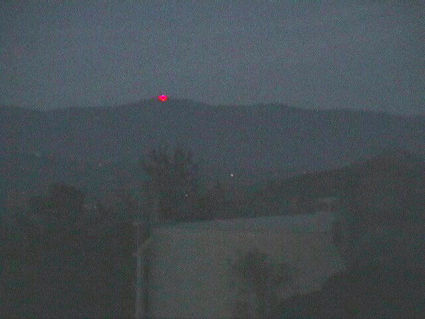 A half milliwatt red laser beam is seen coming from Boucher Hill, 12.7 miles away, during an experiment conducted 20 years ago by Fallbrook's Bob Gonsett and fellow ham radio operator Kerry Banke to have a conversation and to set a distance record at the time.

When amateur radio operators Bob Gonsett (W6VR) and Kerry Banke (N6IZW) shot a red laser beam to have a conversation over 12.7 miles just longer than 20 years ago during an Amateur Radio Field Day, oddly enough, they didn't have much to say to each other.

"Trivial matters, you know, just amateur radio talk," Gonsett said. "We probably talked to each other using our amateur radio call signs, even though we weren't legally obligated to do it because we were talking over a light beam that isn't regulated by the FCC. So, we pretended to have ham conversations and, different people, different ham operators, talked and listened to the responses from Kerry up on Palomar Mountain.

"They all just really had a lot of fun talking over the light beam. It just seemed amazing. You could put your hand in front of the receiver, for example, and block the incoming light being from Palomar mountain and sure enough, the audio went away," he said.

Gonsett, who is from Fallbrook, has been a consulting radio engineer for the broadcast industry for about 50 years, as well as a ham radio operator. He said he has always been experimenting over the years, some of which he labeled as oddball.

"I did that as an adjunct to my interest in ham radio," he said. "Ham radio operators were just very interested in what is possible with extremely low-cost equipment to send your voice over a laser beam. My interest in it started some years ago when I sent a Morse code with a little red laser pointer gizmo, like you'd use for a lecture in a classroom. I used that and just interrupted the beam and sent Morse code over to Frasier Elementary School.

"So, that kind of piqued my interest," Gonsett said.

That's when they set out to test the Palomar Mountain experiment.

"(Kerry) made a two-way, a link so that you could communicate continuously and voice in two directions at once, much as we're talking now over a telephone," Gonsett said. "Again, using just red classroom-type pointer lasers, we tied it into some amateur radio equipment and used that as the telephone, if you will. It was just a very successful demonstration of what can be accomplished with the equipment."

The equipment cost less than $5 total. But don't let the low cost fool you, doing this kind of thing is science – a lot of science.

"What we do is we turn the power on and off very rapidly, and we frequency modulator the power FM modulator, just like an FM broadcast," Gonsett said. "That means the receiver at the other end, it sees not a continuous light beam, but one that's being turned on and off very rapidly now to the eye, it appears like it's just on continuously. It's the on-off is too fast for the eye to see, but electronic circuitry sees this rapid on-off, and the frequency modulation that's on it, just like your FM receiver in your car and detects the audio."

Gonsett chuckled when trying to explain the process to a very confused reporter.

"We'll make you a ham radio operator, yet," he laughed.

He also explained what Field Day is for ham radio operators and what it is, exactly, that they do.

"All across the nation ham radio operators get together in different sites, different locations, and they communicate with each other simulating emergency conditions," Gonsett said. "They communicate by radio and often have emergency power simulating. What would happen in the United States if there were ever a big catastrophe and the telephone system and the cell system and the internet went down? Radio is kind of the last resort, right? It gets through when other forms of communication fail."

Of course, Gonsett conceded, what they did 20 years ago pales in comparison to what technology has created for communication today.

"It's amazing the progress that has been made in the communications industry in general," he said. "I might mention the talking over light beams is nothing new. In fact, the conversation we're having right now may be carried by fiber optics in part, and through the fiber are shot laser light beams that are shooting them through space. They just go through fiber optics. Our conversation right now may in part be overlapping, but confined to varied fiber optic cable."

He went on to explain.

"It all stems from the discovery of electromagnetic waves and electromagnetic waves are not only light, they are radio waves. They are x-rays and gamma rays and television signals," Gonsett said. "We had communication on earth between people so they could work together. And we really had kind of a large time of peace on earth, if you will, where people weren't fighting each other all the time. A lot of technical, remarkable technical progress has been made. Some of which, unfortunately, has come out of war efforts where the military was pressing for this and that from the technical guys and they delivered. And then after that combat was over, some of those technologies were applied to the civilian markets.

"That's one way progress was made – something good coming out of something bad – if you will. Another way is ham radio operators. A lot of the current technology that we see was spawned by people doing little experiments, like what we did with a laser beam. We said, 'Hey, this is pretty cool.' And then somebody else in the commercial industry comes in and says, 'Hey, yeah, let's, let's try to send it through space or these lasers. Let's send them through fiber optics.'" 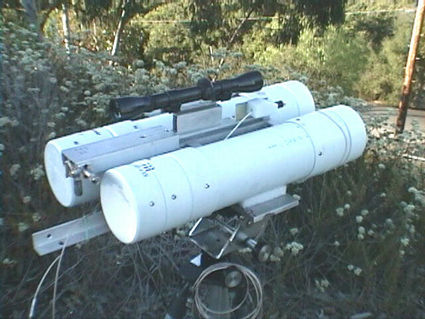 Fallbrook's Bob Gonsett and fellow ham radio operator Kerry Banke shoot a red laser beam over 12.7 miles to communicate with each other 20 years ago during Amateur Field Day, using two of these systems to do it.