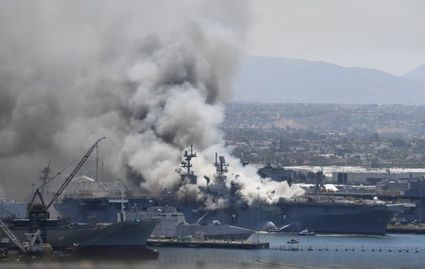 SAN DIEGO (CNS) - An act of arson may have sparked an explosive fire that tore through the USS Bonhomme Richard at Naval Base San Diego last month, extensively damaging the warship and injuring scores of emergency personnel while raging for four days, it was reported today.

Citing anonymous sources, 10News reported that the Naval Criminal Investigative Service has identified a Navy sailor who may have set the blaze intentionally.

The sources told the news station that search warrants have executed at the home of the sailor, whose name and rank were not disclosed.