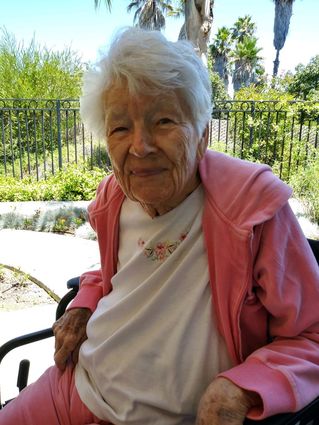 Patricia Audrey (Churchill) Barnes died peacefully in Fallbrook, Aug. 15, 2020, after 95 years of a life filled with amazing people, places and accomplishments. She was born March 9,1925, in Oak Park, Illinois, the third child and only daughter of Frank and Lillian Churchill.

When Pat was in junior high the family moved to Ligonier, Indiana, where she met her handsome future husband, Robert Barnes. She made some wonderful lifelong friends and graduated from high school there, then went on to Northwestern University in Illinois to finish her education.

Meanwhile, Bob enlisted and served in the Marine Corps during World War II. Always persuasive, when he came home to Ligonier in 1945, he convinced her to finish college, complete her teaching credential and finally marry him the day after graduation, June 20,1946. The young couple soon moved to Defiance, Ohio, while Bob attended college and Pat taught P.E. at the local high school, where she was often mistaken for one of the students.

Bob reenlisted in the Marine Corps as an officer, and they eventually moved to North Carolina where their first daughter was born, then to Connecticut where twin daughters followed three years later. The next move was to U.S. Marine Corps Base Camp Pendleton where their only son was born after two years, exactly on the Marine Corps birthday no less. We always suspected she planned it that way.

Transfers to Georgia and Virginia followed before the family finally ended up back in California, settling down for good in the home they had built in the lovely rural community of Rainbow during their first stay at Camp Pendleton.

Pat was a busy stay-at-home mom until their youngest child started kindergarten, but at that point she became a teacher for primary grade students at her son's school. Being both intelligent and versatile, she also served as the driver of the school's standard shift Volkswagen bus during that time.

When the family moved back to Rainbow in 1966, "Mrs. Barnes" began teaching again, this time at tiny Vallecitos School, conveniently located right across the street from their house. She taught physical education, language arts and social studies for the seventh and eighth graders, including her own twin daughters and son. She also acted as "lead" teacher for many years, assisting the principal in various situations and mentoring new teachers.

Although it is hard for most to believe, she always claimed that she loved those children and really enjoyed teaching and coaching those grade levels in spite of their junior high attitudes and drama. Many of her students came back years later and thanked her for being tough on them so they were prepared and did well in high school. Some even came back after college to visit, share their success and say thank you. Those visits were very special for her, and it made her feel happy and proud to know she was making a difference in their lives.

Mrs. Barnes retired in 1991 after 25 years with the Vallecitos School District, during which time she was not only a beloved teacher and coach but also was a valued and well-respected member of the community. She served on the local school board after her retirement.

During Bob's military career, Pat was a dedicated and strong Marine wife, often taking care of the house, children and her job for long stretches of time while Bob was on deployment. She was very thrifty and knew how to get the most out of every dollar, a skill she developed during the Depression years.

She also enjoyed many hobbies, among them dancing, sewing, painting, reading, making holiday candy, playing bridge with friends and especially singing. She always knew all the words, even in the last few years. She loved the lakes of Indiana, going to the Colorado River with family, visiting the beach anywhere and traveling.

Although Bob died in 1985, she had many good friends and family who were willing and able to join her in adventures such as whitewater rafting, steam-boating on the Mississippi, riverboat cruising in Europe and various other trips to exciting destinations.

Besides crisscrossing the United States from coast to coast on Route 66 with the family and pets in tow, Pat visited Hawaii, Alaska, Florida and the islands off the southeast coast, see the fall colors in the northeast, explore iconic landmarks of the Great Plains and experience many other American wonders firsthand.

Sadly, Pat's journey for the past several years has been down the bumpy road of vascular dementia and Alzheimer's disease. Thankfully she had many good years before this horrible disease grew strong enough to affect her independence, memory and quality of life. Even at that last stage, when she couldn't understand what was happening to her, she remained stubborn and feisty, refusing to just give in. It was heartbreaking for the family, but in the end, she was finally able to stop fighting and let go peacefully.

Patricia was preceded in death by her husband, Robert, her parents Frank and Lillian Churchill, and her brothers George, John (and wife Rose), and Guy Churchill, all waiting with open arms to welcome her home at last.

Pat will be missed very much by the family and remembered fondly by the many former students, colleagues and friends lucky enough to have shared a part of her long and interesting life. There will be no public memorial service or burial, but if you would like to make a donation in her memory, the family respectfully suggested the Alzheimer's Association.