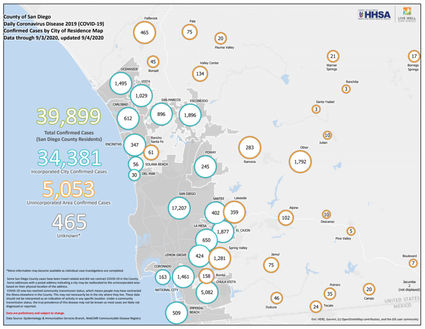 One woman in her late 60s died. She had an underlying medical condition.

The number of new cases is the most since 551 were reported Aug. 7, with the vast majority of the new infections confirmed to have started on days before businesses reopened this week.

``This news is a reminder that we all have a role in keeping the infection rate down,'' said Dr. Wilma Wooten, county public health officer. ``I'm asking San Diegans to take a look at their individual actions and, if necessary, adjust their behaviors to help ensure we remain safe and moving in the right direction.''

Of 7,554 tests reported Friday, 6% returned positive, raising the county's 14-day rolling positive testing rate to 4%, well below the state's 8% guideline. The seven-day average number of tests performed in the county is 7,009.

County health officials reported six new community outbreaks Friday, bringing the number of outbreaks in the past week to 22. Two of the outbreaks were in grocery stores, one in a restaurant, one in a business, one in a hotel/resort/spa and one in a hair salon/barbershop.

Additionally, San Diego County public health officials confirmed multiple clusters of COVID-19 cases within the university community among students. This includes the previously announced off-campus outbreak on Wednesday. SDSU officials say none of the cases under investigation are related to on-campus educational activities, including classes or labs.

Luke Wood, SDSU's vice president for student affairs and campus diversity, said the university was working with a security company to enforce public health code violations and had issued a total of 457 student violations through Friday afternoon. Wood said the most serious of these violations could result in suspension or expulsion from the university. Some organizations have been cited as well. Wood said the majority of these were fraternities or sororities but followed up that not all were, and outbreaks impact the community at large regardless of the type of group they occurred in.

All of the university's in-person classes -- which SDSU President Adela de la Torre said comprised just 7% of all courses -- were moved online Wednesday. SDSU also paused all on-campus athletics training and workouts for two weeks starting Thursday due to COVID-19.

``Only a small fraction of students have met in person,'' de la Torre said. SDSU has a student body of more than 35,000. Nearly 8,000 students live on campus.

She cautioned that ``testing alone and testing once'' would not be enough, and a robust system to enforce health orders would continue to be needed to avoid the ``plague of parties'' already present near campus.

SDSU has more than 130 spaces for students to safely quarantine, according to the university, and all students who have moved into campus housing would be able to move out if they so choose.

County health officials warned that Labor Day weekend could be a spreading event for COVID-19.

``Most people won't be working over the long holiday period, but COVID-19 will not be taking the day off,'' said Wooten. ``The more people go out and the more they interact with people outside their household, the more likely they are to contract the virus.''

Tuesday marked two weeks since San Diego County was removed from the state's COVID-19 watch list and marked nearly three weeks that the county's case rate remained under 100 cases per 100,000 people. Remaining below that metric has paved the way for K-12 schools to reopen for in-person teaching, but many districts are expected to take a cautious approach to reopening.

Schools that choose to reopen must follow state guidance, including mandatory face coverings for students in third grade through high school, increased cleaning and disinfecting practices and implementing a six-foot distance requirement, where possible, in classrooms and non-classroom spaces.

On Monday, San Diego County businesses including movie theaters, gyms, museums and hair and nail salons resumed indoor operations, with modifications, under newly issued state guidance. Restaurants, places of worship and movie theaters are only allowed up to 25% occupancy or 100 people -- whichever is less. Museums, zoos and aquariums are also required not to exceed 25% occupancy.

with names and contact information for customers to track potential future

All indoor businesses must still abide by social-distancing and face-

covering mandates, as well as having a detailed safe reopening plan on file