Redwoods and a bit of mystery at Samuel P. Taylor State Park 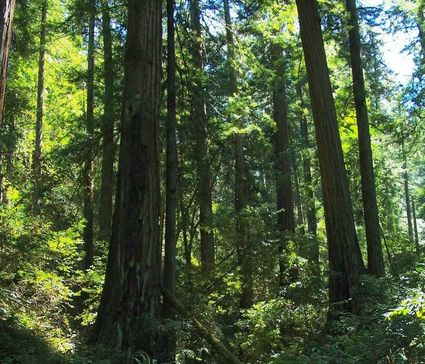 Early morning sunlight filters down through redwood trees, catching the rising smoke of a campfire, creating white misty rays. As I walk through a grove of towering coast redwoods, the damp cool air invigorates me and the carpet of dry needles beneath my feet is soft and inviting. The intoxicating scent of damp redwood and smoke permeates the air. I breathe deeply. Rays of light illuminate the lacy ferns crowding the forest floor. The sun glows green through wide, flat California hazelnut leaves.

This is Samuel P. Taylor State Park, north of San Francisco – a park where I have spent many a day. It's a place to be still in the hush of the redwoods, a place where the cares of the world are washed down the creek and out to sea.

Samuel P. Taylor purchased the land where the park is located; and in 1856, he built the Pioneer Paper Mill. After train tracks were laid in 1874, Camp Taylor Resort was constructed. The Azalea Hotel was part of the resort, and stood in what is now the Azalea Picnic Area. A cement pond circle in the picnic grounds is a remnant of the hotel, which was destroyed by fire in about 1911. The train tracks no longer exist.

There is something special, and a bit mysterious, about this park. Mystery is generated by the rich history, as well as by historic sites, some of which are obscured. Over the years, I heard several tales, including those my Grandma Mary would tell. She was a frequent visitor via the train from Sausalito, when Camp Taylor was in its heyday.

In the 1960s, our family would camp in the park with our yellow and white Siesta trailer. Evenings were spent sitting around a moss-laden stone stove where my father would cook hamburgers over the spitting fire. Then, we popped marshmallows onto long skewers for toasting over the still sizzling fire. The stone stoves remain, and they are still moss-covered.

I spent so much time among those redwoods that I knew every campsite. My favorite was campsite #44 because it was near an old redwood stump surrounded by a sea of ferns. My brother and I called it our fort. I visited my "fort" fairly recently, but the sea of ferns had diminished. A few still remained, but it wasn't crowded with green as it was when I was young.

Ranger talks and slide presentations were engrossing, and I listened attentively as sparks shot upward from the crackling campfire. We would arrive early to sit in the front row on redwood benches. Those presentations kindled my young imagination. We heard one tale of a ruined cabin foundation, and curiosity drove our family to hunt for it. However, we discovered there was no trail, and foliage was so thick it was impossible to attempt a search. Only the deer and raccoon could find that site.

Another ruined foundation was located near Stairstep Falls. In 1965, we discovered a few remnants of a moss-covered stone chimney, but by the eighties, we were unable to locate it.

But, ruins or no ruins, Stairstep Falls is a magical place. A small seasonal waterfall trickles down the hillside over mossy rocks abundant with hanging ferns. The lush vegetation makes the grotto appear like a primeval forest.

In the Orchard Campground stands a lone palm tree. I was told that it was once located in the garden of a private home. On my last visit, the tree was still there – one palm tree in a forest full of redwoods.

Another tale concerned the remains of a wooden dam in Papermill Creek, which is now known as Lagunitas Creek. My brother and I would spend hours in the creek, sailing our handmade boats, and wading in the stream. On one visit something incredible happened. During a particularly light water flow, I was thrilled to find traces of the dam. Five or six pieces of water-worn wood were jutting slightly from the creek bottom! The row of wooden pieces spanned the width of the creek. They may still be there.

All of my discoveries were exciting, but the most exhilarating discovery came in 1967 when I found a worn, white hexagonal tile in Papermill Creek. It was probably from the burned Azalea Hotel. I placed my treasure in a special box with a dated note explaining where I found it. Occasionally, I bring it out and reminise about the history and unsolved mysteries of Camp Taylor.

Hiking the trails is a perfect way to appreciate the vastness and beauty of the redwood forest. The Pioneer Tree Trail is still in existence, but has changed a bit over the years. In the sixties, the trail would head straight up a steep hill to a flat area on the hilltop. There we would sit on logs and listen to the sounds of the forest. The sun illuminated a circle of California hazelnut bushes surrounding the logs. It was truly magical. I was sad when the trail was rerouted.

Another trail was called Lover's Lane when I was young, then the name was changed to Wildcat Canyon. The area surrounding the trail changed, as forests do. A picturesque red footbridge that overlooked a beautiful fern grotto, was destroyed by a storm. The grotto was gone, and a sturdier bridge was built. But, the new bridge was bare wood, and hardly picturesque.

However, Wildcat Canyon is still enchanting. At a place where the trail makes a sharp turn, is a bench where hikers can pause and listen to the echoes in the canyon – the trickling creek, tapping woodpeckers, and the raucous shrieks of a Stellar's jay or two. 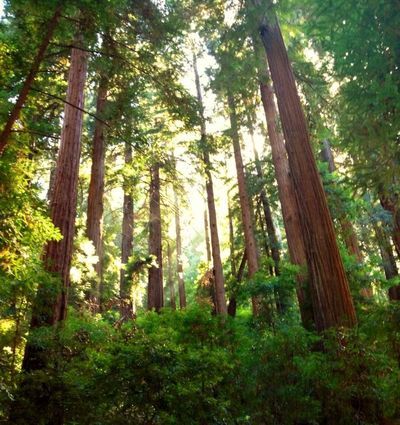 Rays of light through the redwood trees

The South Creek Trail leads to the ruins of the Pioneer Paper Mill, but not much remains except pieces of cement foundations. Further down is the swimming hole where my brother and I spent many hours skipping rocks on the still surface, then disturbing the stillness by splashing in the cold water. In the autumn, we would need to dodge the fallen leaves floating on the surface of the water.

The essence of Samuel P.Taylor State Park is the peaceful, fragrant surroundings in the shadow of ancient redwoods. The lure is delighting in the realm of nature. The promise of historic discovery is also a lure – finding the lone palm tree, or a ruined foundation. But, you probably won't find the white tile – I already did that – 53 years ago.