The Fallbrook community lights up green for Mito Week 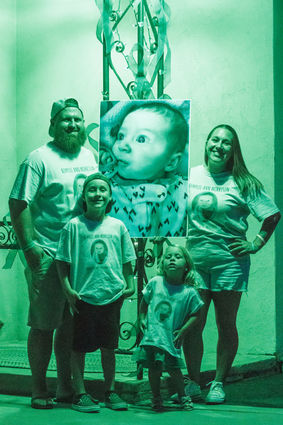 Shane Morrison, his wife Debralee, son Noah Rubalcaba, 8, and daughter Judylee Morrison, 3, stand at their front porch illuminated by green light holding a picture of their newborn Remylee Morrison who passed away at 3-months-old from mitochondrial disease. The Fallbrook family is participating in Mitochondrial Disease Awareness Week which starts on Sept. 13. The green porch light is an effort to raise awareness and spark conversation about mitochondrial disease.

Remylee Ann Morrison was three months and one day old when she died of mitochondrial disease.

Her mother, Debralee Morrison, said her baby was diagnosed first with severe combined immunodeficiency, and doctors were working to get her a bone marrow transplant when Morrison found Remylee unresponsive one morning.

"They got her to Rady Children's Hospital, and we were in there three days before we got the confirmed diagnosis of mitochondrial disease," Morrison said. "Mitochondria is actually in all of our cells in our body; it's what gives your cells energy to keep going. Her body – her mitochondria – was dysfunctional so her cells didn't have the energy to keep her brain, her heart, her lungs, her stomach, all her organs going; she was unable to breathe on her own."

After her daughter was diagnosed with the disease, Morrison met a mother from San Diego whose daughter had died also from the disease.

"Every year there's a Mito 5K that gets done, and I had never heard about it before," Morrison said.

The woman was part of the San Diego Mito Supporters Committee who plan the Mito 5K and asked Morrison if she wanted to help. Morrison agreed.

"All the money goes to UCSD research," Morrison said. "Next year Remylee will actually be the Mito 5K feature child."

Morrison said she honors Remylee by putting out green light bulbs in a worldwide action called 'Light Up for Mito,' which is hosted by International Mito Patients.

Morrison said she reached out to the Fallbrook community for support and received hundreds of comments from local residents and businesses, even places that haven't opened their doors yet.

Sherrie Renee is the community relations director of Estancia Senior Living, an assisted living facility in Fallbrook, which is currently being built.

"I immediately felt for her and all that she's been through," Renee said. "In senior living we see grief, and we see disease, and we see pain a lot, and the community just wants to be there for people.

"We don't know how long we have. We don't know if a disease or whatever is going to take over, but it's not just seniors; it affects everybody. It affects young children; it affects families, and if we can just show our love and support in the Fallbrook community, that's kind of who we are," Renee said.

Since the facility is currently being built, there isn't electricity for them to hang lightbulbs, she said.

"We can put up some balloons," Renee said. "I'm hoping to make a banner; I kind of looked into a website that talks about it, but a banner that can direct people to a website to get more information about the disease."

Cendy Mendoza, a Fallbrook local, also has mitochondrial disease. When she heard Remylee's story, she reached out in support.

"Mitochondrial has affected my life in so many ways, from mentally and physically," Mendoza said.

She was diagnosed when she was 4 years old.

"I'm 24 years old now," Mendoza said. "Although I can't walk, my voice is affected. I have scoliosis. I use a ventilator machine to breath (night and sometimes day). I need help with my daily routine (shower, dress etc.). I've kind of accepted my life, and I believe God has a purpose for me."

When she first saw Morrison's post, Mendoza said she was somewhat upset knowing that Morrison's daughter died from the same disease she had.

"I can't imagine the pain Debralee had of losing her baby," Mendoza said. "But God has his reasons, and at least she's resting in peace and not going through all this mitochondrial disease."

Jodi Mapston, who has known Morrison for a long time, said it's important to bring awareness to the disease.

"She decided to turn the pain into something so powerful and to bring awareness to the disease that there's no cure for," Mapston said of Morrison.

Businesses on Main Avenue in Fallbrook, including The Jewelry Connection, Small Town, and Vintage Retail Therapy, offered their support. People who hadn't met the Morrison family also reached out; some reside in Fallbrook and some don't, but they agreed to light a green light bulb.

"It was pretty heartwarming to see complete strangers want to reach out and be so supportive, which I mean, how can you not? She's a little innocent baby," Mapston said.

Morrison also has an 8-year-old son and 3-year-old daughter.

"I, too, lost my oldest daughter four years ago so I know the pain," Garris said. "I will be turning on approximately 50 green lights that I will have from Sept. 13-19. My balcony will be glowing."

For more information on World Mitochondrial Disease Week and Light Up for Mito, visit https://mitochondrialdiseaseweek.org/.

University of California San Diego's Mito 5K, which will feature Remylee Morrison, will take place May 22, 2021. For more information on the event, visit https://www.mitoresearchfund.org/.

Lexington Howe can be reached at [email protected]