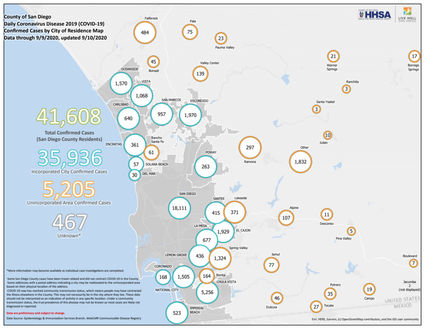 Three women and a man died between Aug. 31 and Sept. 6 and their ages ranged from early 60s to late 80s. All had underlying medical conditions.

Of the 8,311 tests reported Thursday, 3% returned positive, decreasing the 14-day rolling average of positive tests to 4.4%, well below the state's 8% guideline. The seven-day average number of tests performed in the county is 6,236.

County health officials reported three new community outbreaks on Wednesday, bringing the number of outbreaks in the past week to 23. Two of the outbreaks were in private residences and one in a business setting.

Just nine days after reopening its campus for in-person classes, Academy of Our Lady of Peace in North Park moved all its students to online-only courses Thursday after two students tested positive for COVID-19.

Schools were allowed to reopen on Sept. 1, but as San Diego County's rate of infection appears to be on the rise again, Our Lady of Peace is unlikely to be the only school to face consequences of in-person learning. The school sent a letter to parents Wednesday evening placing the blame on the children at the all-girls Catholic school.

``We recognize that despite our best efforts the girls are struggling with maintaining the rules of physical distancing both on and off campus,'' it read. ``Effective immediately, we are implementing a pause in our face-to-face learning model and moving to virtual distance learning (while maintaining the same class schedule). This will allow time for the community to separate, practice physical distancing and reflect on the importance and privilege of our time together on the OLP campus.''

The two confirmed student cases are unrelated, the school said. Students at the school will switch from online education to a hybrid model on Sept. 17, with students attending class two days a week in two separate cohorts separated by last name alphabetically.

San Diego Unified School District and other school districts in regions disproportionately impacted by COVID-19 has stated they will not return until the pandemic lessens. Before schools were able to reopen, nearly 50 schools -- mostly private and/or religious -- petitioned the county to open early for in-person instruction.

Of Thursday's cases, another 69 were tied to San Diego State University, raising the total number of confirmed infected students on- and off-campus to 509 since the fall semester began Aug. 24.

About 75% of students testing positive live in off-campus housing not managed by the university, with 73% of the cases among the freshman and sophomore classes.

The university extended its stay-at-home order for students, directing them to stay in their current residences, except for essential needs, through 9 a.m. Monday. Violations of the order may result in disciplinary action, the college said.

Luke Wood, SDSU's vice president for student affairs and campus diversity, said the university was working with a security company to enforce public health code regulations. He said the company was engaging in patrols around the College Area and reporting possible violations to the university.

Wood said the most serious violations could result in suspension or expulsion from the university. He said some organizations have been cited, as well, mostly fraternities or sororities.

On the question of how much authority the university has in students' off-campus lives, Wood was vague, but said SDSU has ``some authority'' in the

He also said there has been ``a significant reduction'' of public health violations, and that ``the important thing is that the (regulations) are working.''

All of the university's in-person classes, which SDSU President Adela de la Torre said comprised just 7% of all courses, were moved online Sep. 2. SDSU also paused all on-campus athletics training and workouts for two weeks starting Sep. 3 due to COVID-19.

The university announced some very limited courses will be made available in person starting today. Most of these courses have eight or fewer students.

State data released Tuesday showed San Diego County losing some ground in its fight against COVID-19, with the number of new cases per 100,000

people reaching 6.9 and the percentage of positive tests at 4.2%, close to slipping into the ``widespread'' tier like much of the rest of the state.

The county is in Tier 2 or the ``substantial'' tier, the state's second-most strict. With a slight bump in new cases per 100,000, San Diego could find itself closing recently opened businesses.

San Diego County Supervisor Nathan Fletcher said that though the county's numbers are close to the highest tier, they aren't there yet. It would take two consecutive weeks of widespread data before the county could be moved into a higher tier -- or lower tier if the numbers drop significantly.

The numbers for the widespread tier -- which every other Southern California county besides Orange County finds itself in -- are 7 or more new cases per 100,000 and more than 8% positive testing. Just one of those above guidelines could be enough to push a county up a tier.

The county is expanding its walk-in testing capabilities, adding sites at Cal State San Marcos, University of San Diego, San Diego State University, the Tubman-Chavez Community Center, Mar Vista High School and the San Ysidro Port of Entry. A full list of locations and hours can be found at https://211sandiego.org/.

Supervisor Greg Cox said the Great Plates program has been expanded by FEMA and the California Office of Emergency Services through Oct. 9 to provide three meals a day for seniors, or one meal a day for people over the age of 18 with a health condition. Nearly 3,000 people have enrolled in twin programs, but Cox said there are spaces for ``many more'' to sign up.