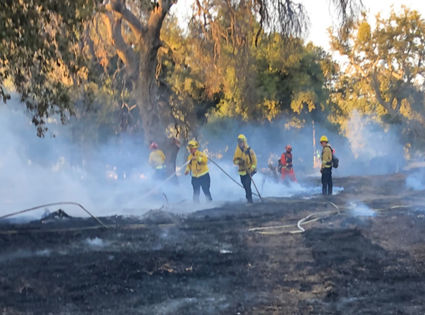 As of 7 a.m. today, the blaze, southeast of Alpine, has destroyed 30 residences and 31 outbuildings, damaged 11 other structures and injured three firefighters, according to Cal Fire.

As of this morning, the resources dedicated to battling the fire included 48 engines, four water-dropping helicopters, two bulldozers, 15 water tenders, 13 hand crews and a total of 609 personnel, according to Cal Fire.

Cal Fire announced today that Cleveland National Forest personnel will now handle any updates about containment efforts. The latest information on the Valley Fire can be found at http://www.inciweb.nwcg.gov/.

At noon Friday, Cal Fire announced that all evacuations and road closures necessitated by the conflagration, dubbed the Valley Fire, had been lifted.

Saturday morning, the county announced the reopening of the Lake Morena and Potrero campgrounds that had been closed during the evacuation orders. Campsites were available to book at http://reservations.sdparks.org.

However, the Cleveland National Forest remained closed to the public until further notice ``to protect natural resources and provide for the safety of the public and firefighters,'' Cal Fire advised.

``This closure will stay in place until conditions improve and we are confident that national forest visitors can recreate safely,'' officials with the state agency said.

The agency cautioned those returning to the fire-ravaged area to ``use extreme caution around trees, power poles and other tall objects or structures that may have been weakened'' by the blaze.

The San Diego County Sheriff's Department was increasing its patrols in the area to ensure public safety and prevent looting.

Officials advised that motorists in the area could face traffic disruptions due to the continued presence of firefighters, law enforcement personnel and utility workers still in the area.

Non-residents were asked to avoid locales in and around the burn zone if possible.

Gov. Gavin Newsom declared a state of emergency for San Diego County on Sept. 6 due to the Valley Fire, a move intended to free up federal relief funds.

County officials encouraged people who have lost their homes or other property to the wildfire to call for assistance at 858-715-2200 or email [email protected]@ca.gov.

Additionally, a county assistance center for victims of the blaze will be in operation at Rancho San Diego Library, 11555 Via Rancho San Diego, on Saturdays and Sundays from 10 a.m. to 6 p.m. and Mondays from 11 a.m. to 7 p.m. until further notice.

Those who would like to help victims of the fire can make donations to a disaster-relief fund created by the San Diego Foundation, which can be accessed online at sdcountyrecovery.com.