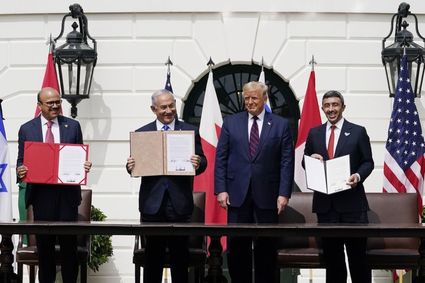 Declaring "the dawn of a new Middle East," President Donald Trump signed historic diplomatic pacts Tuesday, Sept. 15, with Israel and two Gulf Arab nations that he hopes will lead to a new order in the Middle East and cast him as a peacemaker at the height of his reelection campaign.

Hundreds of people massed on the sun-washed South Lawn to witness the signing of agreements between Israel and the United Arab Emirates and Bahrain. The bilateral agreements formalize the normalization of the Jewish state's already thawing relations with the two Arab nations in line with their common opposition to Iran and its aggression in the region.

"We're here this afternoon to change the course of history," Trump said from a balcony overlooking the South Lawn. "After decades of division and conflict, we mark the dawn of a new Middle East."

The agreements do not address the decadeslong Israeli-Palestinian conflict. While the UAE, Bahrain and other Arab countries support the Palestinians, the Trump administration has persuaded the two countries not to let that conflict keep them from having normal relations with Israel.

Trump's political backers are looking for the agreements to boost his standing as a statesman with just seven weeks to go before Election Day. Until now, foreign policy has not had a major role in a campaign dominated by the coronavirus, racial issues and the economy. The pandemic was in the backdrop of the White House ceremony, where there was no social distancing and most guests didn't wear masks.

"There's no more powerful response to the hatred that spawned 9/11 than this agreement," Trump told reporters at the White House.

"This is a historic breakthrough to further peace in the Middle East," Trump, Israeli Prime Minister Benjamin Netanyahu and Bahrain's King Hamad said in a statement. "Opening direct dialogue and ties between these two dynamic societies and advanced economies will continue the positive transformation of the Middle East and increase stability, security and prosperity in the region."

The agreements won't end active wars, but supporters believe they could pave the way for a broader Arab-Israeli rapprochement after decades of enmity and only two previous peace deals. Skeptics, including many longtime Middle East analysts and former officials, have expressed doubts about their impact and lamented that they ignore the Palestinians, who have rejected them as a stab in the back by fellow Arabs.

During the ceremony, Emirati Foreign Minister Sheikh Abdullah bin Zayed Al Nahyan, the brother of Abu Dhabi's powerful crown prince, thanked Israel for "halting the annexation of Palestinian territories," although Netanyahu has insisted that Israel has only temporarily suspended its plans to annex West Bank settlements.

"Today, we are already witnessing a change in the heart of the Middle East – a change that will send hope around the world," al-Nahyan said.

Even the harshest critics have allowed that the agreements could usher in a major shift in the region should other Arab nations, particularly Saudi Arabia, follow suit, with implications for Iran, Syria and Lebanon. Other Arab countries believed to be close to recognizing Israel include Oman, Sudan and Morocco.

"We are very down the road with about five different countries," Trump told reporters before the ceremony.

In addition to the bilateral agreements signed by Israel, the UAE and Bahrain, all three are signing a document dubbed the "Abraham Accords" after the patriarch of the world's three major monotheistic religions.

"This day is a pivot of history," Netanyahu said. "It heralds a new dawn of peace."

"Despite the many challenges and hardships that we all face – despite all that, let us pause a moment to appreciate this remarkable day."

The Palestinians have not embraced the U.S. vision. Palestinian activists held small demonstrations Tuesday in the West Bank and in Gaza, where they trampled and set fire to pictures of Trump, Netanyahu and the leaders of the UAE and Bahrain.

A poll released Tuesday found that 86% of Palestinians believe the normalization agreement with the UAE serves only Israel's interests and not their own. The poll, carried out by the Palestinian Center for Policy and Survey Research, was carried out Sept. 9-12, and surveyed 1,270 Palestinians in the occupied West Bank and Gaza. It has a margin of error of plus or minus 3 percentage points.

Even in Israel, where the accords have received widespread acclaim, there is concern they might result in U.S. sales of sophisticated weaponry to the UAE and Bahrain, thus potentially upsetting Israel's qualitative military edge in the region.

Trump said he is OK with selling military aircraft to the UAE. House Speaker Nancy Pelosi also welcomed the agreements but said she wants to learn details, specifically what the Trump administration has told the UAE about buying American-made F-35 aircraft and about Israel agreeing to freeze efforts to annex portions of the West Bank.

"Today is a truly historic occasion," he said. "A moment for hope and opportunity."

And while the UAE and Bahrain have a history of suppressing dissent and critical public opinion, there have been indications that the agreements are not nearly as popular or well-received as in Israel. Neither country sent its head of state or government to sign the deals with Netanyahu.

Bahrain's largest Shiite-dominated opposition group, Al-Wefaq, which the government ordered dissolved in 2016 amid a yearslong crackdown on dissent, said there is widespread rejection of normalization. Al-Wefaq said in a statement that it joins other Bahrainis who reject the agreement to normalize ties with the "Zionist entity," and criticized the government for crushing the public's ability to express opinions "to obscure the extent of discontent" at normalization.

The ceremony follows months of intricate diplomacy headed by Jared Kushner, Trump's son-in-law and senior adviser, and the president's envoy for international negotiations, Avi Berkowitz. On Aug. 13, the Israel-UAE deal was announced. That was followed by the first direct commercial flight between the countries, and the Sept. 11 announcement of the Bahrain-Israel agreement.