By Adam Beam
The Associated Press 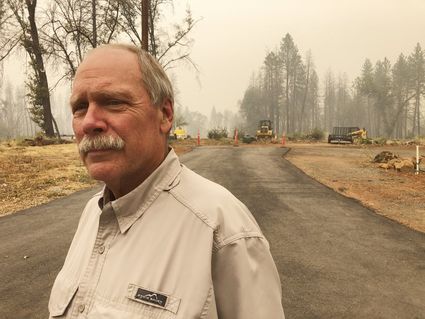 Councilmember Steve Crowder stands on his property in Paradise, Thursday, Sept. 10, 2020. Crowder lost his home in a 2018 wildfire that destroyed most of the town. But he has since built a new house and moved back.

When flames chased Chuck and Janie Dee down the mountain two years ago, they thought they'd never be back.

Yet there they were Sunday, Sept. 13, parking a camper next to their dirt lot and the shell of what had been their swimming pool, excited for their role in restoring their hometown of Paradise to what it was before the deadliest wildfire in California history destroyed their home and most of the community.

They installed a septic tank. They filed for a building permit. They were really doing it.

The couple made it three days before they had to flee again. They awoke after daybreak Wednesday to darkness, the sky blackened by smoke as the ridge above them glowed orange. Their minds went blank as fear reintroduced itself.

Heading down the mountain again, Janie Dee couldn't help but doubt their decision to return.

"I wondered if we were really doing the right thing," she said.

The fire never made it to Paradise as other foothill communities bore the terrible brunt, suffering thousands of destroyed structures. But the flames paused the hopeful, exciting and – at times – frustrating work of rebuilding a town that has become synonymous with heartbreak.

In the nearly two years since the Camp Fire, Paradise has tried to entice people back. The road sign heading into town still boasts of a population of more than 26,000. But the reality is closer to 4,000 now, local leaders said.

The 2018 fire struck two weeks before Thanksgiving, destroyed roughly 19,000 structures in and around Paradise and killed 85 people. Before the fire, the town averaged about 25 to 30 new homes built per year, according to Vice Mayor Steve Crowder. As of Wednesday, the town has issued 1,051 building permits for single-family homes and 345 of them are built.

With so much demand, Paradise hired a private company to act as the city's building department, which they set up in a building donated by Bank of America.

Many local governments shut down when the coronavirus hit. But Paradise kept its building department going – with a few modifications – to prevent a slowdown in permits.

But rebuilding is expensive. New homes must have special fire-resistant siding and roofs, and property owners have to pay to clear their lots of debris before they can rebuild. A government program to pay for the removal of thousands of hazardous trees has been delayed for months by a dispute over the contract.

Meanwhile, the town is covered with RVs – the result of a local law letting people live on their property if they meet certain requirements. But that law is set to expire at the end of the year, and it's unclear if the town council will extend it because of opposition from homeowners.

"I've got people from standing homes and new construction saying, 'We didn't do this to live in an RV park," Crowder said.

Town leaders are also wrestling with how to make the town safer by both preventing wildfires and making it easier for people to flee.

The Paradise Parks and Recreation District is looking into building a buffer zone around the town by buying land and turning it into parks that would limit trees and other fuel for wildfires.

The evacuation plan before the Camp Fire split the town up into zones and had them leave at different times. But the 2018 fire came so quickly everyone had to leave at once, clogging the few roads out of town – a scenario that briefly happened again Wednesday. The council is weighing plans to connect various roads throughout town to give people more avenues of escape.

Communication is still a problem. The latest fire to threaten the town came when Pacific Gas & Electric had shut off power in Paradise and parts of more than 20 counties for fear of high winds causing power lines to spark fires – as happened in 2018.

No electricity made it harder for people to know what was happening and whether they needed to leave. The town has plans to install siren system but is waiting on funding.

All of those issues have framed the November election. It's the first local election in Paradise since the fire, giving residents a chance to weigh in on the town's future. Three of the five town council seats are on the ballot, and 15 people are running for them.

They include Steve Oehler, who moved to Paradise six months before the 2018 fire and has since rebuilt and moved back. He said the current council doesn't respect property rights. 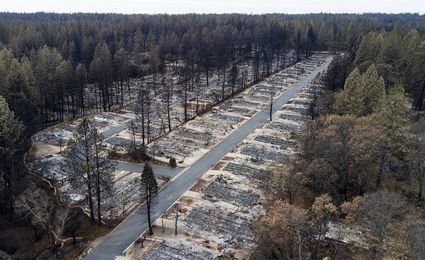 Construction resumed in Paradise, Thursday. Cement mixers poured a foundation for one house as falling ash from nearby fires swirled around the construction workers. It's a reminder of the danger of living in some of the most beautiful parts of California and a potential deterrent to bringing people back.

But the Dees' second thoughts about returning to Paradise didn't last long. They thought of their son and daughter-in-law – who have bought the lot across from them – and their friends who stayed in Paradise and welcomed them back with such excitement.

One day after they fled, the Dees were back, sitting in lawn chairs outside their camper beneath the smoky skies.

"Just like tornado alley. We see this on television. Oh, that whole town got torn up by tornadoes. We ask each other, 'Why do they keep living there?'" Chuck Dee said. "And here we are, we want to continue living here with the threat of fires. I guess it just depends on what you like."