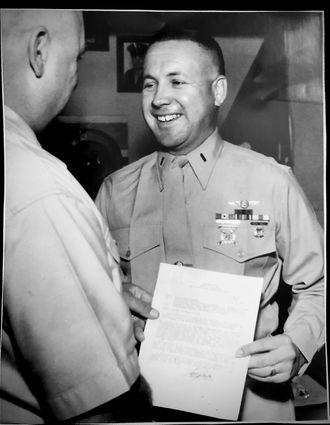 "Dick," as he was affectionately called, was most proud of his 20 years of service in the U.S. Marine Corps. He enlisted right out of high school at the age of 17, and it was this choice that helped shape the rest of his life. He grew up in the Marine Corps. It laid the foundation for who he became as an adult and helped define him as a person.

The Marines gave him confidence and a sense of purpose and helped him become a man of honor, conviction and integrity. Near the end of his service, Dick was a Mustang who was commissioned during the Vietnam War. He retired from the Marines at the ripe old age of 37.

Not long after enlisting, he did perhaps the next best thing in his life – he married his high school sweetheart, Elizabeth. They met at the age of 12 and 13 and were together for 70 years, married for 64 of those.

After retiring from the Marines, Dick went back to school, earning his associate degree from Palomar College and a bachelor's degree in accounting from National University. He had a second career in property management, which allowed him to play a large role in helping raise his first grandchild.

Dick also officiated basketball at the high school and college levels for more than 30 years and umpired softball for many years.

When Dick retired fully, he loved traveling the globe. He traveled to such places as Puerto Vallarta, Mexico; Acapulco, Mexico, and through the Panama Canal on a cruise, just to name a few, all with his loving wife by his side. He also enjoyed spending as much time as he could with his grandchildren.

In addition to his wife Elizabeth, Dick is survived by his four children, Kim, Shawn, Rick and Pam, and his six grandchildren, Shane, Jared, Kayla, Lauren, Spenser, Christina and Nicca. He also leaves behind a 9-month-old, great-grandson, Lennon Richard Gloady.

Dick was interred with full military honors at Miramar National Cemetery Monday, Sept. 21. Donations may be made to either the Wounded Warriors or Veterans of Foreign Wars Post 1924 in Fallbrook.