'Necessary Sacrifices' is an invitation to eavesdrop 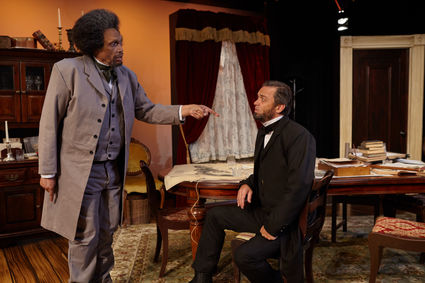 Hawthorne James as Frederick Douglass emphasizes his point in a conversation with Ray Chambers' Abraham Lincoln in "Necessary Sacrifices."

It is a brilliant opener for North Coast Repertory's 39th season. Like other local theatres NCRep has gone online.

Playing online until Oct. 11, "Necessary Sacrifices" is an imagined-historical work by playwright Richard Hellesen about conversations between Abraham Lincoln and his visitor Frederick Douglass.

Albeit there are no written accounts of what actually was said, no notes by Lincoln exist of either of the two meetings, just the same, both meetings were documented in the White House records to substantiate this fictional account.