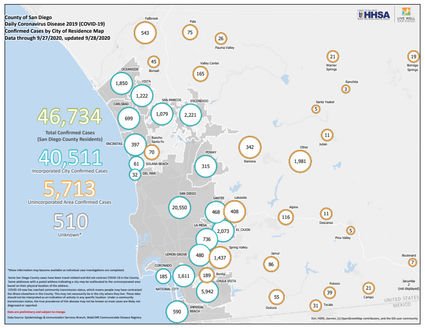 The state will hold its weekly update Tuesday, with San Diego last week barely avoiding the dreaded ``purple'' tier. Under state monitoring metrics, San Diego County is currently in the second tier, or the red tier. The county's state-calculated, adjusted case rate is 6.9 per 100,000 residents. The testing positivity percentage is 3.8%.

No new deaths associated with the illness were reported Monday and the total fatalities remain at 776.

Of the 6,010 tests reported Monday, 2% returned positive, dropping the 14-day rolling average percentage of positive cases to 3.3%. The state-set target is less than 8%. The seven-day daily average of tests was 8,431.

San Diego State University reported three new cases of COVID-19 on Monday, bringing the total number of cases to 1,077 since Aug. 24, the first

day of instruction for the fall semester. A total of 33 cases were reported at SDSU on Friday, Saturday and Sunday.

These totals include 1,033 confirmed cases and 44 probable cases. None of the COVID-19 cases have been connected with instructional or research spaces since fall instruction began.

The eight confirmed faculty or staff cases are from staff members associated with an auxilary of SDSU.