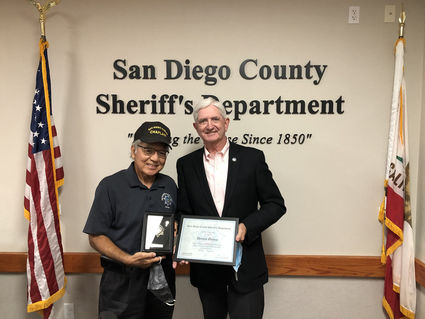 Sheriff William Gore, right, presents retiring chaplain Dennis Ginoza with a shadow box and certificate of appreciation for his 13 years of service, Sept. 14.

FALLBROOK – Dennis Ginoza was recognized for his 13 years as a sheriff's chaplain in Fallbrook at the San Diego County Sheriff Station, Sept. 14. At the retirement presentation, Lt. Barrett read a letter of appreciation for Ginoza's years of service. He also included the six years Ginoza served as chaplain in Santee for the sheriff department and with the fire department and paramedics.

Barrett also cited the grief support Ginoza gave to the family of Deputy Matthew Creed who was killed in an off-duty vehicle collision this past January. His three children survived the accident.

Ginoza was presented with a shadow box, a framed certificate of appreciation and a letter of appreciation. Sheriff William Gore also gave words of gratitude to Ginoza for his years of service.

Gore told Ginoza, "Your career with the sheriff's department is a testament to your dedication to public service. Employees such as you are the heart and soul of public service agencies. Your professionalism will serve as an example to the many members of this organization who are just now starting their careers... You have maintained a standard of excellence for yourself and the department. Throughout your career, peers have described your performance with terms such as knowledgeable, encouraging and faithful.

"You received a doctorate degree from the Claremont School of Theology, served as a Peace Corps volunteer in Costa Rica, and a chaplain with the Red Cross, your chaplaincy work at the Fallbrook Station have been instrumental in the ministering and mentoring of deputies and professional staff, while participating in station life, riding with deputies and responding to critical incidents.

"You have consistently performed each of your duties with integrity and professionalism. On behalf of a grateful department, I join your wife Sylvia, your two sons, four grandchildren and your entire extended family in wishing you continued personal and professional success," Gore said.

Ginoza said, "I appreciate the many deputies with whom I did ridealongs, the sergeants and lieutenants who served, and the office staff and their support. I appreciate the recognition; those years as a sheriff chaplain have been a privilege and blessing."