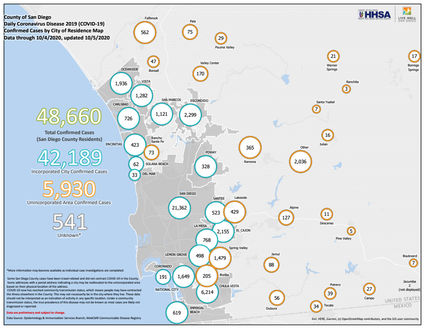 County officials are awaiting fresh data from the state Tuesday, a week after avoiding being pushed back into the most restrictive ``purple'' tier in the state's four-tier reopening plan. The county is the red tier for COVID-19 cases, with a state-adjusted case rate of 6.7 per 100,000 residents and a testing positivity percentage of 3.5%.

Of the 6,577 tests reported Monday, 3% returned positive, bringing the 14-day rolling average percentage of positive cases to 3%. The state-set target is less than 8%. The seven-day daily average of tests was 9,307.

to an intensive care unit.

None of the 224 cases reported Monday are connected to San Diego State University, but seven previously reported confirmed cases are now associated with the school outbreak, bringing the total number of SDSU cases to 1,134, according to public health officials.

Those seven cases were previously reported to the San Diego County Health and Human Services Agency, but only recently identified -- through

continued cross-referencing between SDSU and the HHSA -- as having an SDSU affiliation.

A total of 407 on-campus students, 704 off-campus students, 10 faculty or staff and 13 visitors have either confirmed or probable positive COVID-19 diagnoses. Officials said 53 of the total are considered ``probable.''

SDSU announced last Wednesday that it was extending a pause on in-person courses through Oct. 12. Effective that day, a limited number of courses will resume in person. Most of those courses are upper-division or graduate level, and have been ``determined by faculty and academic leaders to be essential to student degree completion, licensure, and career preparation,'' university officials said in a statement.

In the seven-day period from Sept. 28 through Sunday, 23 community outbreaks were confirmed, well above the trigger of seven or more in seven days. A community setting outbreak is defined as three or more COVID-19 cases in a setting and in people of different households over the past 14 days.

The county has expanded its total testing sites to 41 locations, and school staff, including teachers, cafeteria workers, janitors and bus drivers, can be tested for free at any one of those sites. A rotating testing program with the California Department of Forestry and Fire Protection was in the works

for schools in the county's rural areas.

There are no state testing requirements for children, but all school

staff who interact with children must be tested every two months. If schools

state's monitoring system, they would not be affected. However, if a move to a

different tier happened before schools opened for in-person learning, it would

If parents want to test their children for the illness, they have

options, including Rady Children's Hospital, through Kaiser Permanente or

through the 41 sites the county manages. Children as young as 6 months can be

tested at the county-run sites.