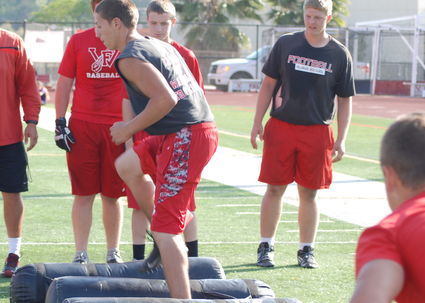 While there won't be training sessions similar to this Fallbrook High School football summer camp back in years past, workouts, following all Centers for Disease Control and Prevention guidelines, will and are taking place to get athletes ready for the upcoming high school seasons.

Slowly but surely, athletes from Fallbrook High School are beginning to get some training ahead of what will be a fast and furious two-season sports calendar this school year.

While the athletes aren't officially training as Warriors, they are getting some work in.

"We're going to be open and up here on (Sept.) 28th, which is good for the outside club teams if you have a facility," Pat Walker, athletic director of Fallbrook High, said. "We're going to have football – they are going to be able to work out. Of course, following all the Centers for Disease Control and Prevention guidelines. We have water polo; they're going to actually do some club workouts. And then we have cheer. Field hockey is doing their own club stuff, cross-country, of course, doing their club stuff, and they have a sixth period so they can run a little bit.

"Everything has to be under a club umbrella, not affiliated with the high school until Dec. 12, when we can go after it.

"I think it is good that we'd have the facilities for our student athletes to get back and just for mental and emotional health, I think it's going to be good for this town," he said.

For Walker, it's been a little bit hit and miss as to when and how to open up facilities and allow them to participate in workouts.

"Hearing about all that's gone down in North County, there's been people that have opened and then shut down," he said. "Ramona is about the only school that pulled it off and didn't have any issues and ran a summer camp following, again, the COVID-19 guidelines. Del Norte got shut down."

Officially, most of the Warrior team sports will begin practices in early December with an eye on beginning to hold competitions later that same month. But for now, it's just workouts.

"There are no scrimmages. There's no contact; literally this is strength and conditioning," Walker said. "That's what we're allowed to do in pods at the max of 16; we're gonna be doing 12 in a couple of groups for football. If you look at San Diego, this is where we're at."

Once games begin, there will not be much of a breather for the athletes and teams as preseason games and league games will come at a rapid pace. Some athletes may have to choose between sports due to the condensing of the seasons.

"At this point we have no definites of kids saying, 'I'm choosing this sport because it's the same season situation,'" Walker said. "We haven't had any of that yet, but you know, it's going to happen this spring. It is the one time that's going to be interesting with the seasons of sports all together, because now you're talking, boys' and girls' lacrosse, soccer, basketball. It'll be very interesting; that's going to be difficult."

Walker said he had a meeting coming up with the North County Association.

"We're looking at scheduling, to work scheduling the best we can to allow kids to be able to do both," he said. "It's still going to be really difficult though. It is.

So much of the future of high school sports in Fallbrook has to do with how the county maintains or decreases the number of COVID-19 cases and hospitalizations. The county has recently teetered on falling back into a more restrictive category in Gov. Gavin Newsom's color-coded tier guidelines.

"I'm crossing my fingers that it just keeps getting better," Walker said. "It looks decent now. It's getting a little better, but hopefully, with schools just starting to allow the kids to come back and do some workouts, hopefully we don't have some stuff happen.

"Our new (CIF San Diego Section) commissioner is like, 'we're all full steam ahead,' but this stuff can get shut down so fast. We're hoping to have our season in the winter and everything will go smoothly. There's no guarantees with fans (in attendance). That's still stuff that has to be really worked out, and things have to go the right way for this to happen.

"We're just so crossing our fingers that it does because I think it's so, so important," Walker said.