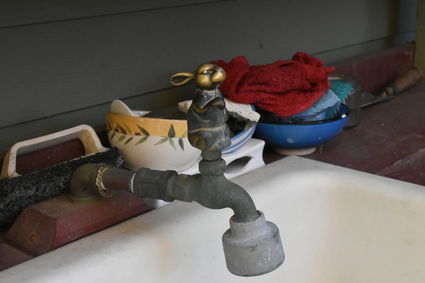 This rabbit faucet came out of a building in L.A. and is now being used at Jerry Murphy's house.

One man's trash is another man's treasure – this is true in the case of local resident Jerry Murphy who has repurposed and gathered items over the years to create fun and unique projects.

The 30-year Fallbrook resident also volunteers for the Fallbrook Land Conservancy and the Fallbrook Beautification Alliance, helping clean up the community.

"Over the years I've always been one for reusing things," Murphy said. There is a large shed on his property with rusted, vintage tin as the roof.

"I was doing electrical work; this was probably 20 years ago up in Orange County and it was on a baseball field and it was a flat roof shed for equipment, and they wanted to tear it down," Murphy said. "So I just basically reused it and put it up; a lot of the tin you see, that came out of East County on a chicken farm."

Next to the shed is a large chicken coop, which is soon-to-house four chickens.

"The thing about chickens is you always get mice and rats," Murphy said. "I was doing all my concrete and did a little stem wall so this way it's totally enclosed and the mice can't get inside."

The ground of the chicken coop is covered in sand.

"A buddy of mine was doing a job – he had a dump truck and they had sand in a playground, and they were gonna put that foam in there," Murphy said. "So I had them dump a load of sand, and I used it in my sandbags during the rainy season; then when I emptied my sandbags I dumped them in here."

On the other side of his house there's a small greenhouse attached to a shed.

"I built this one here (the shed) and this was mostly out of used material," Murphy said. "I was doing some work for a friend of mine so I traded for the greenhouse. This is another I put a little stem wall in, it's got misters in it and everything."

Inside Murphy's home, he's got quite a few unique projects on display.

"My wife and I, this was years back – we went to Europe and went to England, and I got really inspired by the stone work and stuff in Italy and everything," Murphy said. "So I did my upstairs bathroom in travertine and I used a travertine that was from Turkey."

In the front room, the fireplace is covered in rocks. 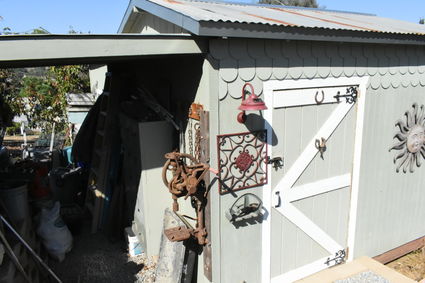 Jerry Murphy collected tin from an old job, which he then used for his shed on his property.

"I hand picked that (the rocks) out of the San Luis Rey River," Murphy said. "You can't just go to Home Depot and buy this stuff, and then using artificial rock doesn't look right."

"Maybe it goes back to my New England roots," he said, laughing. "In New England they reuse a lot of the old stuff from the farmers and you keep it around forever – a lot of my tools were my grandfather's and my father's."

There are several other projects around the property.

"I've always enjoyed reusing and making things," Murphy said. "And since I've retired I really kind of got into it more."