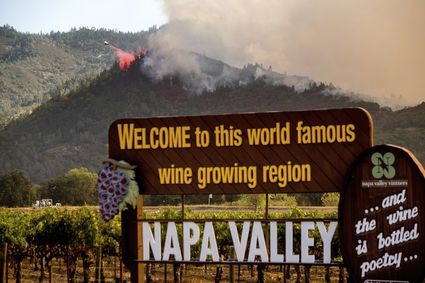 In this Sunday, Sept. 27, 2020, file photo, an air tanker drops retardant on the Glass Fire burning in Calistoga. Deadly wildfires in California have burned more than 4 million acres this year, a record for the most acres burned in a single year. California fire officials said the state hit the fearsome milestone Sunday, Oct. 4, with about two months still left in the fire season.

The new mark for the August Complex in the Coast Range between San Francisco and the Oregon border came a day after the total area of land burned by California wildfires this year passed 4 million acres, more than double the previous record.

Gov. Gavin Newsom said the amount of land scorched by the August Complex is larger than all of the recorded fires in California between 1932 and 1999.

"If that's not proof point, testament, to climate change, then I don't kn...