Arnold, Collings, Contreras and Philo named Students of the Month 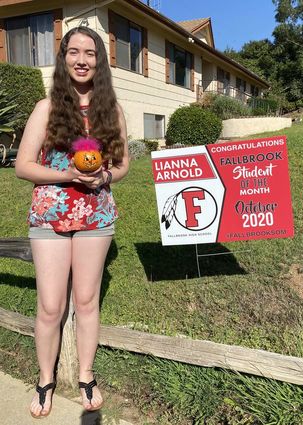 Among other activities, Lianna Arnold writes for the school newspaper and is a member of the Decathlon and Academic teams, Model United Nations and Skills USA.

Although, due to current limitations on large gatherings, they could not be recognized at the monthly breakfast that the Student of the Month Committee has been hosting for the past 23 years, the students each received a visit from representatives of Village Rotary, OASIS and Fallbrook High schools, and the Student of the Month Committee members, who celebrated the students with not only a drive-by caravan in their neighborhoods but also with yard signs, gift bags with items from several Fallbrook businesses, certificates from governmental offices and congratulatory remarks from school personnel and their own family members.

One of the honorees, Kaitlyn Collings, exuberantly commented that this fanfare, complete with Principal Narciso Iglesias blowing a megahorn, was better than being honored at a breakfast!

Lianna Arnold, nominated by science teacher Marin Pinnell, has balanced an active lifestyle with Advanced Placement classes, extra-curricular activities, private tutoring and community service. With a 4.75 grade-point average, Arnold plans to study nuclear engineering at a university and then enlist in the U.S. Navy.

Universities where she is currently applying include Georgia Tech, UC-San Diego, UC-Berkeley and Texas A&M. Arnold writes for the school newspaper, The Tomahawk, with a series, "This Day in History," and articles on cultural traditions. She is also a strong member of both the Decathlon and Academic teams, Model United Nations and Skills USA.

Volunteering with the Fallbrook Beautification Alliance even during the COVID-19 period, she has been able to independently do cleanups at various locations such as the Bonsall Bridge and Ingold Field. This year, Arnold is serving as an online tutor to high school students in physics and her favorite subject, mathematics.

Pinnell commented at the celebration in front of Arnold's home that the first word that comes to her mind about Arnold is "photographic" because Arnold remembers everything that she learns. When asked what she loves about Fallbrook High School, Arnold immediately answered, "The teachers."

Former ASB director and current social studies teacher Alana Milton said that her nominee, Kaitlyn Collings, "sees the bright side of everything." As junior class president and, now, senior class president, Collings appreciates serving as a school leader, learning skills in all of her classes – especially her American Sign Language class – that she has taken throughout her high school years, playing sports, working as a nanny and doing community service as a coach for younger students in field hockey.

Having earned Most Valuable Player in the past, Collings works hard with her field hockey team (last year's CIF champions), currently going to morning practices at 7 a.m. A player all four years at FHS, she served as captain of her junior varsity team and is looking forward to the season starting in November.

With a 3.6 grade-point average, Collings has an avid interest in film study and is looking at pursuing a career in screen-writing. However, she also has a strong desire to pursue criminal law and is applying to colleges in Hawaii, Utah, and Washington State. A young lady of many interests and talents, Collings enjoys writing and playing piano.

She, her parents and three younger brothers greeted the caravan outside their home. Collings feels the staff and community have gone overboard to help all the high school students adjust to the new way of learning by remote. Although Milton could not attend in person, she called Collings to congratulate her while she was being honored at her home.

Daniel Contreras is described by Pinnell, who also nominated him, as a "marathon" because he is constantly on the go as he achieves his goals as an athlete on the track and cross country teams, as a strong academic student with a 4.6 grade-point average and as a volunteer in the community.

With his grandmother and siblings looking on as he was honored at their home, Contreras said that he wants to study biology and/or engineering, and that he is looking at schools on the East Coast as well as UC San Diego and San Diego State University.

A long-distance runner for four years at Fallbrook High, Contreras has earned Most Inspirational and Leadership awards as well as having been named All-League Second Team, being in the top 20 runners in the division.

Contreras also participates on Fallbrook's Decathlon Team and has joined the Democratic Club. He has served as a soccer coach to sixth graders on weekends and with the food bank of his church. Asked what he likes most about FHS, Daniel also expressed his appreciation for his teachers, stating with humility that they are his major source of motivation.

Oasis High School student Kyleigh Philo has been nominated by her teacher of four years, Kevin Kent. It was a nice surprise for Philo to have close friends join in the drive-by celebration (arranged by her mom) and, also, for Kent to be present and speak of why she well deserves the honor of Student of the Month.

With a 3.8 grade-point average, Philo looks forward to completing her general education at Palomar Community College after high school and then pursuing her bachelor's degree in either art history or elementary education. Because she enjoys working with children, she tutors them for a private company in Temecula.

Philo looks forward to this year's softball season to open when she will be playing for the FHS varsity softball team as a pitcher. Her volunteer experience includes serving as a coach at pitching clinics for Fallbrook's Girls Softball and helping organize a library at an elementary school in Temecula. One of her favorite interests is painting, which she started doing with her grandmother; she has also sculpted.

Kent's comments about Philo include that she "is a very bright, cheerful and thoughtful young lady. She always has a smile on her face and displays a very kind demeanor. She is such a positive person, always speaking well of others and expecting the best of others and herself. She represents all that is best about Oasis High School."

The October Students of the Month represent the best of Fallbrook's student population. Nominated throughout the school year by educators, the business community and charitable organizations, students are selected for this honor by criteria that include excellence in academics, school service and activities, community service, leadership and citizenship.

November's Students of the Month will be announced the afternoon of Nov. 6, when the next caravan celebration will occur.

Submitted by the Student of the Month Committee. 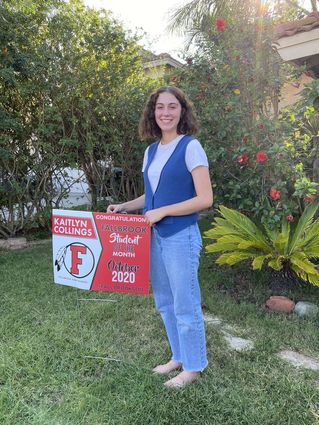