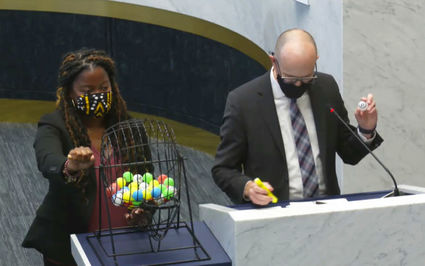 Marvice Mazyck, chief deputy clerk of the San Diego board of supervisors, and Andrew Potter, clerk of the board, conduct random drawings for commission members.

Eight members of the San Diego County's new Independent Redistricting Commission were selected during two random drawings at the Board of Supervisors' meeting, Oct. 13.

Clerk of the board staff drew the names from a pool of 59 qualified applicants. Originally, there were 60 but one withdrew after he was accepted for another redistricting commission. Nearly 300 people had applied to serve on the county's volunteer commission.

The commission will redraw the boundaries for the county's five supervisorial districts based on the new numbers in the federal census.

The 2020 census numbers will reveal new data on residents and whether one district is more populated than the others. Each supervisor should represent a diverse population of about 650,000 residents.

District lines can shape a community's ability to elect the representative of their choice. The commission will act independently of the board of supervisors.

The first random drawing at the Oct. 13 meeting selected one member from subpools for each of the five supervisorial districts. The second drawing added another three names from the pool of remaining applicants. 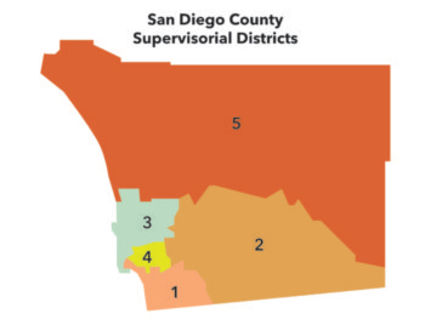 The commissioners will meet to choose six more members from the remaining pool of the 51 most qualified applicants to round out a 14-member commission.

Once formed, the Redistricting Commission must hold at least seven public hearings with at least one hearing in each supervisorial district. Other meetings, dates and times are at the discretion of the commission.

The group will review the new census data when it is released and start the process on redrawing new maps for the five supervisorial districts. The maps must be completed by Dec. 15, 2021.

For more information and to sign up for email updates, visit http://www.sandiegocounty.gov/redistricting.