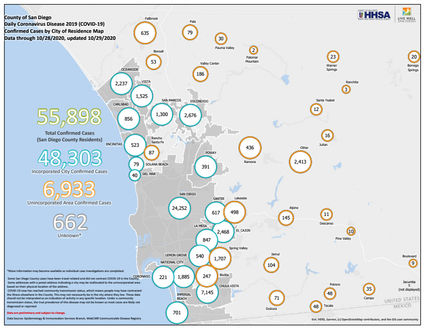 Three men and one woman died between Oct. 26 and Oct. 27. Their ages ranged from mid-30s to early 80s. All had underlying medical conditions.

Of the 13,338 tests reported Thursday, 3% returned positive, bringing the 14-day rolling average percentage of positive cases to 2.8%. The 7-day

A total of eight new community outbreaks were confirmed Thursday, four in businesses, two in grocery settings, one in a preschool and one in a restaurant. These bring the total in the past week to 37.

A community outbreak is defined as three or more COVID-19 cases in a setting and in people of different households over the past 14 days.

Dr. Wilma Wooten, the county's public health officer, said the three most common co-morbidities with COVID-19 in the region were hypertension, diabetes and heart disease.

The county avoided the state's ``purple'' tier for yet another week on Tuesday, remaining in the less restrictive ``red'' tier of the state's four-tiered coronavirus monitoring system.

The county's adjusted case rate dropped to 6.5 new daily COVID-19 cases per 100,000 population, which is far from ideal, but allows the county to maintain some semblance of normalcy.

``We have to redouble our efforts,'' he said, referring to the approaching winter and flu season. ``This has the potential to take off.''

According to the California Department of Public Health, the county's unadjusted case rate is 7.4 per 100,000 -- enough to be in the most restrictive purple tier, which has a floor of 7 per 100,000. However, the high volume of tests the county is able to perform daily allows for an adjustment from the state. This adjustment has kept the county in the red tier for several weeks, saving it from having to shut down nearly all nonessential indoor businesses.

The state data, which is updated every Tuesday, reflect the previous week's case data to determine where counties stand in the state's four-tiered reopening system.

San Diego County did show modest improvement, dropping 0.4 from last week's unadjusted case rate of 7.8. The testing positivity rate continued an upward trend, rising 0.2% from last week to reach 3.5%, but remains low enough for this metric to remain in the orange tier. If a county reports statistics meeting metrics in a higher tier for two consecutive weeks, it will move into that more restrictive tier for a minimum of three weeks.

The state's health equity metric, which looks at the testing positivity for areas with the lowest healthy conditions, dropped from 5.5% to

5.1% and entered the orange tier. This metric does not move counties backward to more restrictive tiers, but is required to advance.