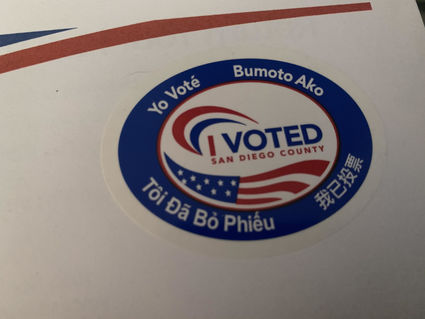 San Diego County was a stronghold of the Republican Party for a significant chunk of the last century, with the Republican candidate for president carrying the county in all but one election from 1948 through 2004, when George W. Bush beat John Kerry in San Diego County by a healthy margin of about 52% to 46% (Bill Clinton eked out a narrow plurality over George H.W. Bush in 1992 with Ross Perot in the mix).

As of Oct. 19, 2020, there were more registered Democrats in San Diego County than Republicans, with 40.12% of the county's voting population being Democrats, 27.63% Republicans, 26.11% reporting no party preference and the remaining approximately 6% registered to third parties or with unknown party registration, according to data from the California Secretary of State's Office.

Some areas of San Diego County have bucked the leftward trend for a time, with data showing county Board of Supervisors districts 2 and 5, which cover East and North County, respectively (the Fallbrook area falls into District 5) retaining a Republican voter registration advantage in 2016. But as of 2020, Democrats now have a slight edge in District 5, leaving District 2 as the only reliably-Republican county supervisorial district in San Diego.

To be sure, Republicans are still competitive in North County – while this story will be published after the Nov. 3 election, a SurveyUSA poll in September showed Republican Darrell Issa leading Democrat Ammar Campa-Najjar just 46% to 45% in the race for the 50th Congressional District, which includes Fallbrook as well as rural East County and Temecula in Riverside County. However, a more recent poll showed Issa with a more commanding 51% to 40% lead, with 9% of voters still undecided.

And while there hasn't been any polling data for the 75th Assembly District, which includes Escondido, San Marcos, Fallbrook, Temecula and areas in between, Republican Marie Waldron did win about 57% of the vote to Democrat Kate Schwartz's approximately 38% in the top-two primary in March.

But neither of those two districts line up exactly with supervisorial District 5, which covers Oceanside, Carlsbad, Vista and San Marcos as well as Fallbrook while excluding parts of Escondido.

Supervisorial District 5 is represented right now by Supervisor Jim Desmond, the former mayor of San Marcos and a Republican. He's not up for re-election until 2022 and it's far too soon to tell what could happen in that election.

Meanwhile, Democrat Terra Lawson-Remer is currently battling Republican Kristin Gaspar in her re-election bid in District 3, which already had around a 2,000-voter Democratic registration advantage in 2016 that has now widened to more than 40,000. If Gaspar manages to win, District 5 could prove crucial in 2022, and if she loses, it could be an avenue for expanding a Democratic majority. Time will tell.