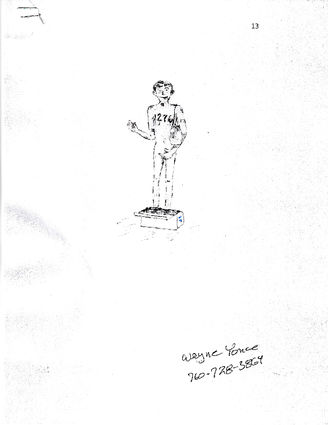 On June 2, 1944, Recruit Company 1276 was formed at the Great Lakes Naval Training Center. There were 120 apprehensive young men lined up behind the 120 cardboard boxes that lay on the wooden floor of the large red brick building built before WWI. The boxes contained "ditty bags," small canvas bags with rope drawstrings.

Orders were delivered in the bored monotone developed by persons who have repeated the exact same words many, many times. And they were always prefaced with "Now hear this," "Listen up, you people," or "You hear me, and you hear me good!"

We were told to put our wallets and toilet articles into those bags, and then remove our clothes – shirts, pants, shoes, socks, underwear –everything!

The last of our civilian identities were stuffed into those boxes to be mailed home. We were then told, "Listen up, you people! You will now place the ditty bag on your left shoulder."

We stood naked, ditty bags on our left shoulders, as a pharmacist mate, with a brush and stainless-steel bowl of disinfectant, moved among us, painting a large, purple, dripping 1276 across our chests. I took in the scene, and imagined female recruits receiving equal treatment.

Company 1276 proceeded, still naked, down hallways, and into many rooms, for reasons I don't remember and probably never did understand. I do remember a physical exam with shots and much poking and prodding. Bottlenecks prevented moving at a steady pace – often long delays with no movement.

The all-powerful occupants of those rooms had a mid-day meal, but we recruits did not. We stoically sat, bare-assed, on the hallways' bare wooden floors; a line pointed one direction on one side, and another, the opposite direction, on the other side.

At one point I found myself, still naked, exchanging grins across the hall with recruits in a "colored" company. (The military services were not yet integrated.) Picture it! A row of boys of varying shades of blackish-brown sitting on one side of the aisle, and a row of pinkish-white boys on the other – all wearing nothing but purple numerals on their chests and tan canvas bags on their left shoulders . . . silently evaluating one another.

Late that afternoon, we were given sea bags and we proceeded, still naked, down another line. Items of clothing, tossed at us, were stuffed into those bags. Nearing the end of a mind-numbing day, we were directed to a large shower room. (Had it been a Nazi gas chamber we would have obediently filed in.)

We showered, put on skivvies (white cotton undershirts and boxer style shorts), then unfolded and pulled on stiff new blue denim dungaree trousers and chambray shirts. We put on shoes and socks and strapped on tan canvas leggings – the "boots" we'd be wearing until graduation. An unshaped "Dixie cup" white hat topped off the costume.

With heavy sea bags on our shoulders we were marched, for what seemed like miles, from the headquarter's old red brick buildings to an outlying area that would be our home for the next several weeks.

Even the elements conspired to make our day a strange and eerie one. The rain of an Illinois thunderstorm was now intermittent, but the sky above was still a dark black. The setting sun, shining low and bright, cast long shadows across empty parade grounds, and transformed spartanly unadorned white two-story wooden barracks to gleaming, golden structures – a stark contrast against the black eastern horizon. 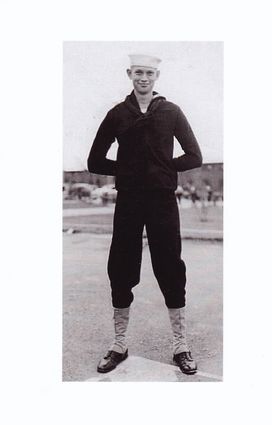 We finally made it to a barracks, and then to a mess hall. It had been a long day. It had been a very long day, a "Twilight Zone" day! I had been stripped of my clothing, my modesty, my dignity, my identity. I had been painted, poked, prodded, and probed. I'd been interrogated and intimidated, harassed and humiliated. I was a mindless, unthinking, unfeeling, sub-human blob, devoid of any redeeming value.

After a prescribed period of further degradation, I would be forged into a proud naval warrior, worthy of our nation's fighting fleet. Oh yeah!

Four days later, June 6.1944, all recruit companies were assembled on the station's main parade ground. The commanding officer told of the D-day landings at Normandy, told us this day was indeed a historical turning point, but the European war was far from won, and the Pacific war and the defeat of Japan was still out there.

We were told not to worry; there would be war enough for all of us.