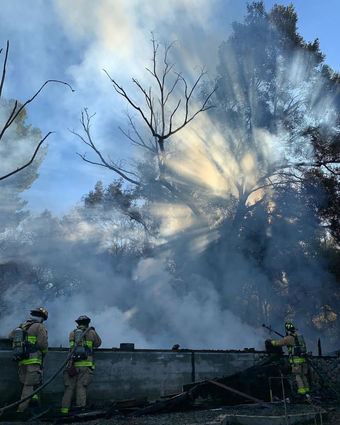 Firefighters responded to a home fully engulfed in flames in Sandia Creek Drive area of De Luz. Three agencies worked to contain it to 1/4 acre.

DE LUZ - A fire that broke out in the home of well-known horse rescue center owners Friday, Dec. 4 that also spread to surrounding vegetation was contained and extinguished by firefighters, but not in time to save the home.

By the end of the day Friday, friends had established a GoFundMe account to help the family recover from the devastation that home insurance may not cover.

The residents, Ron and Crystal Wylie, and their daughter Kiersti, who operate the Sandia Creek Ranch Auxiliary Foundation for horse rescue, escaped unharmed although one of their cats died in the fire.

Friends said they lost everything else at the estimated 3,000-square-foot house with a walk-out basement in the 40300 block of Sandia Creek Drive.

"Their puppies made it out safely ... (and) thankfully none of the 60+ horses on the property were injured,'' friend Stephanie Unger said in the

GoFundMe appeal. "But they lost everything in and around their home. There are no family pictures that survived. No memorabilia. Nothing. They do not know what insurance will cover, but it is believed that the contents are not insured.

"This is a family who loves people and animals alike. They would give the shirt off their backs to help somebody. They ... have devoted their lives to caring for horses and people. They also run a Pony Club Riding Center and work hard to educate people about horses and proper horse care and riding. They are strong advocates for horses and well respected in their community.''

The blaze was reported just before 4:45 a.m. Friday, San Diego County Sheriff's Lt. Pat McEvoy said. The Wylies were able to get out of the house without suffering an injury, according to reports.

As the fire spread to nearby vegetation, firefighters halted the blaze at a quarter-acre, with the help of North County Fire, Cal Fire San Diego, and Camp Pendleton Fire, all called to the scene.

"It was fully involved when we arrived." Choi compared the potential danger to the Lilac Fire because of the number of old oak trees and fuel in the area. "Because of the fast action of the firefighters, they were able to contain it to 1/4 acre and provide a buffer for 67 horses with the hoses. The horses were in corrals and didn't have to be moved. If the fire would have grown larger, we would have had to move them because of the amount of heat radiating from the fire. We were in contact with the Human Society. It was appropriate in case the horses needed to be moved."

Deputies and neighbors were ready to evacuate horses from the property, authorities said.

Cal Fire San Diego Capt. Thomas Shoots said crews were called in once the flames spread to the vegetation surrounding the home.

Choi said the fire was contained by 6:23 a.m. and crews stayed on-site to mop up and manage hot spots.

Both directions of Sandia Creek Drive were shut down near Lynda Lane during the event and the cause of the fire remains under investigation.