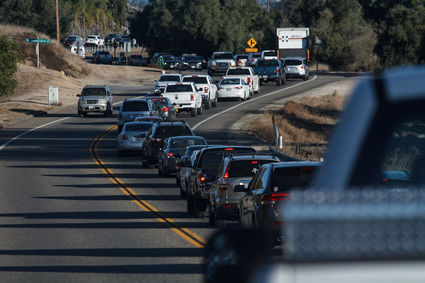 Eastbound traffic on East Mission Road backs up nearly two miles from I-15 as the traffic light on Old Highway 395 is shut off due to a public-safety power outage by SDG&E, Dec. 3.

Gusty Santa Ana winds and low humidity combined to heighten the risk of wildfires last week and more than 70,000 local utility customers – including more than 4,000 in and around Fallbrook – lost power Thursday, Dec. 3, their electricity shut off as a precaution.

Nearly 2,000 customers in the Fallbrook area remained without power Friday, but most regained power by Sunday.

"Due to updated reports from the National Weather Service and SDG&E, we are anticipating continued high winds combined with internet and power outages," FUESD said in its follow-up statement Thursday afternoon, after it had already cancelled Thursday classes. "Therefore, tomorrow (on Friday, Dec. 4), FUESD school sites and Day Camps will remain closed. Again, we believe this is the safest option for students, staff, and families."

FUESD made school lunches available for pickup both Thursday and Friday.

Humidity levels dipping below 10%, sustained 30-plus-mph winds and gusts of 60 mph or higher created "extremely critical'' combustion hazards beginning Thursday, Dec. 3, and into early this week after press time. Fire hazards were most acute in mountain areas, including areas near Fallbrook. 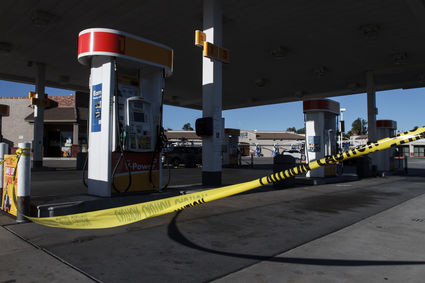 A gas station along East Mission Road in Fallbrook is shut down because of a public-safety power outage by SDG&E during high winds.

Due to the wildfire warning, San Diego Gas & Electric on Tuesday, Dec. 1, notified about 88,700 of its customers in inland communities that they could be subject to public-safety power shut offs from Wednesday night into the weekend, and potentially through Monday.

On Thursday morning, 73,348 customers had their power shut off, with another 21,806 under consideration for shutoffs, according to the SDG&E web site. Approximately 4,900 of the customers facing shut offs were in the Fallbrook, Bonsall, Rainbow and Pala areas.

By Thursday afternoon, a few thousand shutoffs had been lifted, but power remained out at 70,613 addresses, including about 4,200 in Fallbrook, Bonsall, Rainbow and Pala.

Most Fallbrook residents had their power restored by the weekend, and there were few shutoffs reported in the area on Dec. 7, save for 36 customers in the Pala area

The dry and windy weather pattern is likely to continue into this week, though likely in a weakened manner, forecasters said.