Trump Pardons 49 people; far less than any other modern president 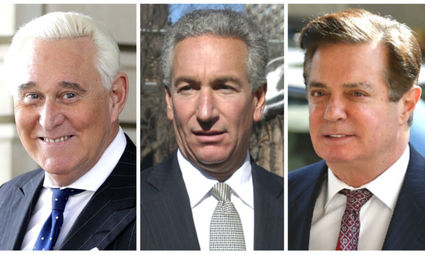 According to Pew Research, President Trump has granted clemency less frequently than any president in modern history. So far, Trump has pardoned or commuted sentences for a total of 49 people.

A Nov. 24 Pew Research report noted, "As he enters the home stretch of his White House tenure, Donald Trump has used his clemency power less often than any president in modern history, according to data from the U.S. Department of Justice. Trump's sparse use of pardons, commutations and other forms of official leniency stands in sharp contrast to his predecessor, Barack Obama, who used the clemency power more frequently than any chief executive since Harry Truman. Obama, by comparison, granted clemency 1,927 times during his eight-year tenure, including 212 pardons and 1,715 commutations.

The White House announced that Manafort and Stone faced charges as a result of Robert Mueller's investigation of alleged Russian interference in the 2016 which "premised on the Russian collusion hoax."

The pardon of Paul Manafort spared him serving the bulk of a 7 ½ year prison term. The White House statement read, "Mr. Manafort has already spent two years in prison, including a stretch of time in solitary confinement-treatment worse than what many of the most violent criminals receive. As a result of blatant prosecutorial overreach, Mr. Manafort has endured years of unfair treatment and is one of the most prominent victims of what has been revealed to be perhaps the greatest witch hunt in American history."

The statement continues, "As Mr. Manafort's trial judge observed, prior to the Special Counsel investigation, Mr. Manafort had led an 'otherwise blameless life.' Since May, Mr. Manafort has been released to home confinement as a result of COVID-19 concerns."

As for Roger Stone, the statement reads, "Mr. Stone is a 68-year-old man with numerous medical conditions. Due to prosecutorial misconduct by Special Counsel Mueller's team, Mr. Stone was treated very unfairly. He was subjected to a pre-dawn raid of his home, which the media conveniently captured on camera. Mr. Stone also faced potential political bias at his jury trial. Pardoning him will help to right the injustices he faced at the hands of the Mueller investigation."

The 2019 Mueller report stated that while Russia did attempt to interfere in the election, there was no evidence to establish that Trump or any other U.S. citizen knowingly colluded with Russia.

The father of Trump's son-in-law, Jared Kushner, was sentenced to two years in prison after pleading guilty in 2004 to 18 counts of tax evasion, witness tampering, and making unlawful campaign donations.

The White House announced that since completing his sentence in 2006, Kushner had been devoted to important philanthropic organizations and causes, including Saint Barnabas Medical Center and United Cerebral Palsy.

Looking at the same data another way, Trump has granted clemency to less than half of 1% of the more than 10,000 people who petitioned him for it through the end of the 2020 fiscal year (which ended Sept. 30), according to the Justice Department. That, too, is the lowest percentage of any president on record, though George W. Bush came close, granting clemency to just 2% of the more than 11,000 people who asked him for it during his eight years in office.

Clemency refers to multiple forms of presidential mercy. The two most common forms are pardons, which forgive past crimes and restore civil rights, and commutations, which completely or partially reduce sentences for those in prison or on community supervision. Two less-common forms are remissions, which reduce financial penalties associated with convictions, and respites, which are temporary reprieves that are usually granted to inmates for medical reasons.

The Justice Department's statistics, it's important to note, do not count clemency granted through proclamation or executive order, such as the actions taken by Presidents Gerald Ford and Jimmy Carter to forgive thousands of Vietnam-era draft dodgers. The DOJ numbers also count some clemency recipients twice – for example, in cases where someone received both a pardon and a commutation.

While rare so far, Trump's use of presidential clemency has caused controversy because of the nature of his pardons and commutations. Many of Trump's clemency recipients have had a "personal or political connection to the president," according to a July analysis by the Lawfare blog, and he has often circumvented the formal process through which clemency requests are typically considered.

But Trump is far from the only president who has faced scrutiny over his use of clemency. Obama's frequent use of commutations, particularly for prisoners convicted of drug-related crimes, prompted criticism from Republicans, who said it benefited "an entire class of offenders" and infringed on the "lawmaking authority" of the legislative branch. And President Bill Clinton drew bipartisan condemnation for pardoning a fugitive commodities trader, Marc Rich, on his last day in office in 2001.

Presidents have generally become less forgiving over time, at least when looking at the proportion of clemency requests they have granted. Every president from McKinley to Carter granted clemency to at least 20% of those who asked for it, according to the Justice Department data. But the percentages have fallen to the single digits for every president since George H.W. Bush, including Obama, who granted clemency to just 5% of those who petitioned him for it. 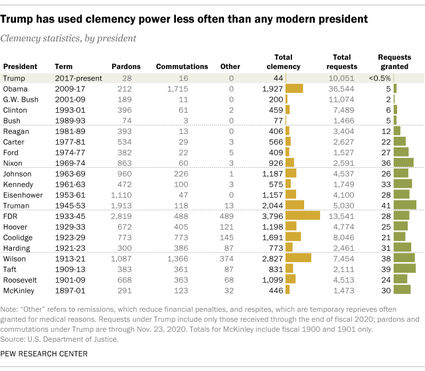 Clemency statistics by President. Reprinted by permission of Pew Research.

Obama's relatively low percentage, however, is largely due to the fact that his administration encouraged federal prisoners to apply for leniency under a program known as the Clemency Initiative. The program, which launched in April 2014 and ended in 2017 when Obama left office, allowed "qualified federal inmates" – those who met certain Justice Department criteria – to apply to have their prison sentences commuted. The initiative led to a surge in petitions and helps explain why Obama's use of clemency tilted so heavily toward sentence commutations, rather than pardons.

Overall, Obama received more than 36,000 clemency petitions during his time in office, by far the largest total of any president on record. Petitions have declined considerably during Trump's tenure.

John Gramlich is a senior writer/editor at Pew Research Center.