By Pan Pylas
The Associated Press 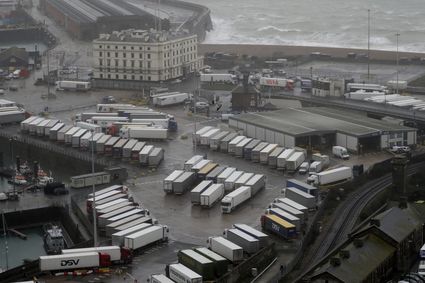 Lorries are parked near the port, Monday, Dec. 21, after the Port of Dover, England, was closed and access to the Eurotunnel terminal suspended following the French government's announcement that banned all travel from the U.K. for 48 hours from midnight Sunday.

Trucks waiting to get out of Britain backed up for miles and people were left stranded at airports Monday, Dec. 21, as dozens of countries around the world slapped tough travel restrictions on the U.K. because of a new and seemingly more contagious, but not more deadly, strain of the coronavirus in England.

From Canada to India, one nation after another banned flights from Britain, while France barred the entry of trucks from Britain for 48 hours while the strain is assessed.

The precautions raised fears of food shortages in Britain if the restrictions drag on.

After a conversation with Fre...