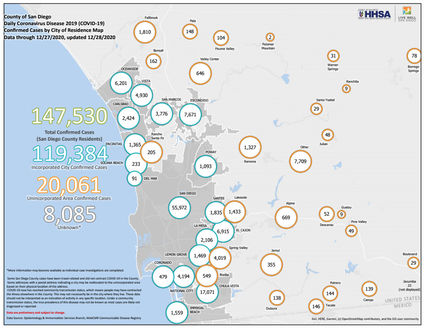 That order, which covers an 11-county Southern California area, took effect at 11:59 p.m. Dec. 6 and was set to expire Monday. But with the region's intensive-care unit capacity at hospitals still effectively listed at 0%, Newsom said the order is all but certain to be extended.

A formal announcement had been expected Monday but was delayed until Tuesday. Newsom said the state was still compiling hospital and case data, and completing hospital-demand projections for the next four weeks.

He noted, however, that based upon large number of people who appeared to have ignored warnings against travel over the Christmas holiday -- and those who will likely so do over the upcoming New Year's holiday, the state is bracing for a ``surge on top of a surge, arguably on top of, again, another surge.''

The 1,751 new COVID-19 cases reported Monday in San Diego County marked the first day since Dec. 14 that fewer than 2,000 new infections were reported. The county has a cumulative case count of 147,530. Another two deaths were also reported Monday, raising the death toll to 1,404.

The county is still reporting 17% of its existing ICU beds as available, but Supervisor Nathan Fletcher reported last week that many of those beds lack staffing. The real number of available, staffed beds is likely much lower.

The county has reported a 136% increase in COVID-19-related hospitalizations in the past 30 days and a 125% increase in ICU patients in the same time period.

No new community outbreaks were confirmed on Monday, but there have been 59 confirmed outbreaks in the last seven days and 245 cases associated with those outbreaks. A community setting outbreak is defined as three or more COVID-19 cases in a setting and in people of different households over the past 14 days.

Though county officials advised residents to avoid holiday gatherings, many apparently didn't take that advice. Anyone who participated in a

gathering is being urged to get tested, as well as those who recently returned from traveling, anyone who has symptoms and those at higher risk for COVID-19, whether or not they display symptoms.