Evacuations were lifted by Thursday evening, and the 4,200-acre Creek Fire was 98% contained at press time 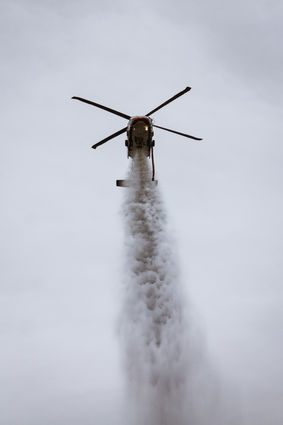 A helicopter makes a water drop on hotspots near DeLuz Road as firefighters work at containing the Creek Fire.

A large brush fire that broke out in De Luz late Dec. 23 spread into Camp Pendleton and triggered mandatory evacuations in Fallbrook early Dec. 24 – an unwelcome Christmas Eve surprise for the thousands of Fallbrook residents who were forced to leave their homes. The fire's size had been expanded to more than 3,000 acres acres with 0% containment on Thursday morning, but authorities said at the time that firefighters had encircled the blaze and expected to control it. By Dec. 28, the fire was 98% contained at about 4,200 acres.

Homes along much of the northwestern corner of Fallbrook wer...